Rabbi Pinchas Menachem (Elazar) Justman or Yustman or Yostman The Piltzer Rebbe or Pilcer Rebbe, also known by the title of his main work, the Siftei Tzadik  was a Hasidic Rabbi  for some Gerrer Hasidim, in Pilica, Poland. 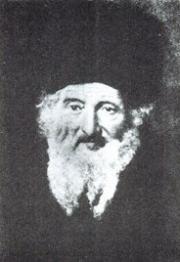 Rabbi Pinchas Menachem was born in Góra Kalwaria in 1848 to his father Rabbi Binyamin Leizer Justman and mother Tzina Pesa Justman (née Alter), daughter of the Chiddushei Harim the first Gerrer Rebbe, and named Pinchas Menachem. He was known to family and friends as Reb Mendele of Ger. His mother, Mrs. Tzina Pesa, died when Pinchas Menachem was young. Orphaned of his mother, he was brought up by his grandparents, Rabbi Yitzchak Meir Alter (known as the Chiddushei Harim) and his wife. When he was about nine years old, his grandfather took him to visit the Kotzker Rebbe, an event which left a lifelong impression on him. He married Hendel Lea, daughter of his uncle Abraham Mordechai Alter, in 1864.

Justman published the fifth printed edition of the Jerusalem Talmud, at Piotrkow from 1899 to 1903, with the commentary of Rabbi Yaakov Dovid Wilovsky(Ridbaz).

In 1905 when his brother-in-law, the second Gerrer rebbe—Rabbi Yehudah Aryeh Leib Alter, died, some of the Hasidim sought to bestow the mantle of leadership upon him. He moved out of Gora Kalwaria to Pilica, or Piltz as it was known by the Hasidim, and become their Rebbe. He added the name Eleazar to his name Pinchas Menachem, when he was very ill, on 23 Tammuz 5672 (8 July 1912).[6]Eventually he recovered from his illness. In 1915 he moved to Wieruszów, and four years later he moved to Częstochowa.

He died on Shabbat 10th of Kislev 5681 (21 November 1920), in Częstochowa. His funeral was held on Monday because of a disagreement between the Community of Pilz and the Community of Częstochowa regarding the burial place. Eventually he was buried in the Jewish cemetery of Częstochowa,next to his son Yitzchak Meir who died a year earlier. The sixth Rebbe of Ger was named Pinchas Menachem by his father Rabbi Avraham Mordechai Alter—after his beloved uncle Rabbi Pinchas Menachem Justman

He wrote a commentary on Torah, called Sifsei Tzadik, which was published after his death by his son Rabbi Enoch Gad Justman and Rabbi Menachem Mendel Alter of Pabianice, son of the Sfas Emes. His commentary on the Talmud and Psalms disappeared at some point during the Holocaust.

The youngest son and most famous, Rabbi Chanoch Gad Justman - married Devora Matill Halperin. He succeeded his father as Rabbi of Piltz. He later became the Rabbi of Wieluń. He perished in Treblinka (died 1942)

His second wife Chaya Yuta (Rothenberg), had no children from him.

May the merit of the tzadik Rabbi Pinchas Menachem protect us all. Amen