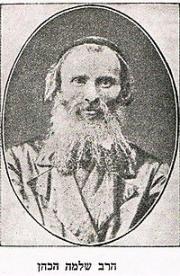 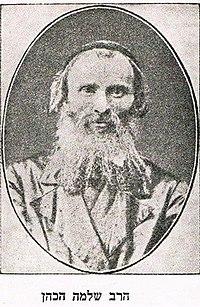 In 1828, Shlomo was born to Rabbi Yisroel Moshe HaCohen, a dayan in the rabbinic court in Vilna. As a young child, Shlomo was known for his diligence and devotion to Torah study. When Shlomo was thirteen years old, he became deathly sick and his doctors told him that he must stop studying Torah because the intensity of his studies was adversely affecting his weak heart. Nonetheless, Shlomo refused to relent, and continued to study Torah, as he reasoned that Torah is his life.HaKohen's glosses on the Talmud were published in the Vilna Edition Shas under the name "Cheshek Shlomo" (חשק שלמה). Rabbi Shlomo's halachik responsa were published under the title "Binyan Shlomo" (שו"ת בנין שלמה).

His responsa have gained a position of prominence in halachic literature, and are frequently quoted.

Rabbi Shlomo HaKohen was the editor of the Vilna Edition Shas, where he pored through various manuscripts to verify and establish an accurate version of the Talmud without the mistakes so prevalent in previous editions of the Talmud. As a critical scholar, Rabbi Shlomo HaKohen researched the text of Ketuvim based on various writings of the Vilna Gaon.

Rabbi Shlomo HaCohen was allegedly an enthusiastic supporter of the Mizrachi Religious Zionism movement. However, claims that Rabbi Shlomo honored Theodor Herzl by greeting him with a Torah scroll in hand and described him as the equivalent of the Jewish kings of the Biblical era are false.

Rabbi Shlomo HaKohen was a great-grandfather of Rabbi Nochum Partzovitz

May the merit of the tzadik Rabbi Shlomo HaKohen protect us all. Amen