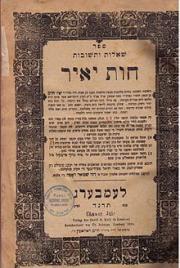 Rabbi Yair Chayim Bacharach  was a German rabbi and major 17th century posek, who lived first in Koblenz and then remainder of his life in Worms and Mainz. His grandmother Eva Bacharach was a granddaughter of the Maharal of Prague, and his father Moses Samson Bacharach, and grandfather had served as rabbis of Worms.

He was the author of Chavos Yair ("Villages of Yair") a collection of responsa by the title of which is he commonly referred (first published in Frankfurt a Main, 1699); its title is a reference to his grandmother Chava as well as to a place mentioned in Numbers 32:41 and elsewhere in the Jewish Bible. Other work includes his Mekor Chayim, which was intended as a principal commentary to Shulkhan Arukh but was withdrawn by Bacharach when he discovered that other commentaries, notably the Taz and the Magen Avraham, had appeared. It is still regarded a prime source of material concerning minhagim (customs) of the area and epoch. Bacharach also wrote a work criticizing Rabbi Aharon Teomim-Frankels' Mateh Aharon. Therein, Bacharach sharply criticizes the pilpulic methodology common among the rabbis of his time.

Besides his Halakhic expertise he had complete mastery of all the sciences, music, history and wrote poetry. He compiled a 46 volume encyclopedia on many topics.

In 1689 the Worms community was decimated by the French during the Nine Years' War. Gradually, it was rebuilt. In 1699 he was appointed rabbi of Worms where his father and grandfather had served before him. He served for only three years until his death in 1702. The inscription on his tombstone begins with the words, “A great and dark horror befalls us from the hiding of the light of Rabbeinu...”

In 1982 his major work, Mekor Chaim, was finally published posthumously by Machon Yerushalayim.

Bacharachs' view of Kabbalah was nuanced. While he believed Kabbalah to be very holy, he maintained that it posed great theological danger, and should therefore only be studied by the extremely pious, and only with a teacher. In his responsa, Bacharach relates that a commoner asked him to explain the Kabbalistic formulas commonly printed in prayer books. Bacharach refused to answer, and when he was pressed, said only that he didn't know the explanation. Although he discouraged in-depth study of Kabbalah, he encouraged simple reading of the Zohar

May the merit of the tzadik Rabbi Yair Chayim Bacharach protect us all. Amen