Rabbi Aharon Kotler (1891–1962) was an Orthodox Jewish rabbi and a prominent leader of Orthodox Judaism in Lithuania, and later the United States, where he founded Beth Medrash Govoha in Lakewood Township, New Jersey. 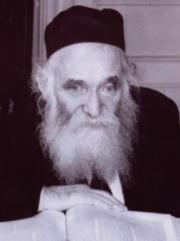 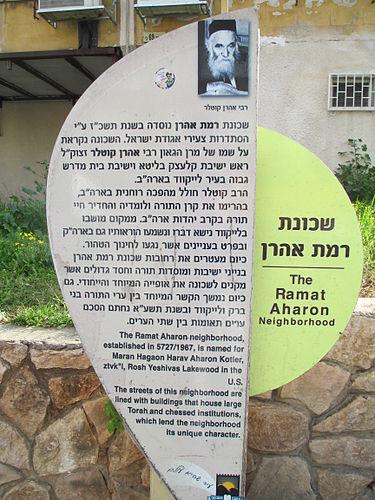 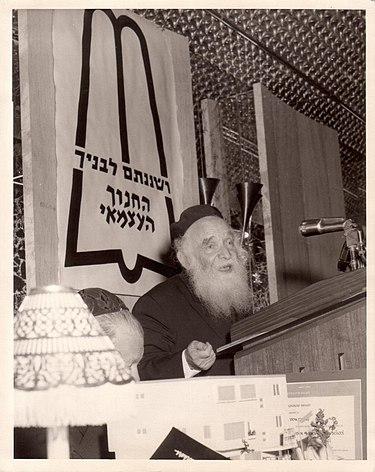 Rabbi Aharon Kotler (1891–1962) was an Orthodox Jewish rabbi and a prominent leader of Orthodox Judaism in Lithuania, and later the United States, where he founded Beth Medrash Govoha in Lakewood Township, New Jersey.

Kotler was born in Śvisłač, Russian Empire (now Belarus) in 1891. He was orphaned at the age of 10 and adopted by his uncle, Rabbi Yitzchak Pinnes, a Dayan in Minsk. He studied in the Slabodka yeshiva in Lithuania under the "Alter (elder) of Slabodka", Rav Nosson Tzvi Finkel, and Rabbi Moshe Mordechai Epstein. Subsequently, he joined his father-in-law, Rabbi Isser Zalman Meltzer, to run the yeshiva of Slutsk.
World War II and move to the United States
After World War I, the yeshivah moved from Slutsk to Kletsk in Belarus. With the outbreak of World War II, Kotler and the yeshivah relocated to Vilna, then the major refuge of most yeshivoth from the occupied areas. Reportedly Kotler encouraged the yeshiva to stay in Vilna despite the approaching Nazis. Most of his students were murdered by the Nazis. Some did not listen to him and escaped to China. He was brought to America on April 10th, 1941 by the Vaad Hatzalah rescue organization, and guided it during The Holocaust. At first, he settled in New York City's Upper West Side, and in 1949, he moved to the Borough Park neighborhood of Brooklyn.
In 1943, Kotler founded Beth Medrash Govoha in Lakewood Township, New Jersey, with 15 students. By the time of his death in 1962, the yeshiva had grown to 250 students. He was succeeded by his son, Rabbi Shneur Kotler, as rosh yeshiva. As of 2011, Beth Medrash Govoha is run by his grandson, Rabbi Malkiel Kotler, and three of his grandsons-in-law, Rabbis Yerucham Olshin, Yisroel Neuman, and Dovid Schustal. By 2019 the yeshiva had grown into the largest institution of its kind in America with 6,715 students, 2,748 regular and 3,967 in Kollel status. while the surrounding Lakewood community supports a network of more than 100 other yeshivas and approximately 200 synagogues for an Orthodox population estimated at more than 66,000.
A committed anti-Zionist, Kotler also helped establish Chinuch Atzmai, the independent religious school system in Israel, and was the chairman of the Moetzes Gedolei HaTorah of Agudath Israel. He chaired the Rabbinical administration board of Torah Umesorah, and was on the presidium of the Agudas HaRabbonim of the U.S. and Canada.
Upon the death of his father-in-law, Rabbi Isser Zalman Meltzer, he inherited his father-in-law's position of rosh yeshiva of Etz Chaim Yeshiva of Jerusalem. In an unusual arrangement, he held this position while continuing to live in America, and visiting Jerusalem occasionally. Today, his grandson, Rabbi Zevulun Schwartzman, heads a kollel located at Etz Chaim Yeshiva

Kotler died at Columbia-Presbyterian Medical Center in New York City on November 29, 1962. A funeral service at the Congregation Sons of Israel Kalwarier on Manhattan's Lower East Side drew 25,000 mourners, with 200 officers from the New York City Police Department assigned to the event, which was described by the congregation's president as the largest gathering of mourners in his experience. The 700 seats in the sanctuary were reserved for notables. In an atmosphere described as being reminiscent of Yom Kippur, eulogies were delivered by Rabbi Moshe Feinstein and by Satmar Hasidic leader Rabbi Joel Teitelbaum, among others. Following the funeral, Kotler's body was transported to Idlewild Airport to be flown to Israel accompanied by two dozen of his students. After arriving in Israel, the plane carrying Kotler's coffin was greeted by a crowd of 5,000 at the airport. Jerusalem traffic was brought to a standstill by crowds of 30,000 people who lined the path of the procession transporting his body from the airport to Etz Chaim Yeshiva, where thousands of mourners from throughout Israel came to offer their final respects before his burial on Har HaMenuchot.

May the merit of the tzadik Rabbi Aharon Kotler protect us all. Amen