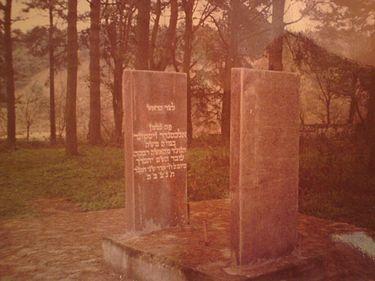 Rabbi Alexander Ziskind of Horadna, known as Muharaz (died 18 Adar 1794) was a 18th-century Lithuanian rabbi and kabbalist. He became famous as one of the greatest rabbis of his generation and as a special tzaddik of his kind, and was known as "Baal Yesod ve-shoresh havoda"  after his book.

Alexander Susskind ben Moses of Grodno.  died at Grodno in 1794. He wrote "Yesod ve-Shoresh ha-'Abodah" (The Essence and Root of Worship), Novydvor, 1782, a work frequently republished. It contains directions for the right use and comprehension of the ritual, the daily Jewish prayers, and those for the Shabbat and Jewish holidays; also divers exegetical articles on Rashi's commentary on the Nevi'im and Ketuvim, and articles on the Holy Land and the Temple in Jerusalem. He also left an ethical will to his sons, which contains admonitions regarding divine service. This work was published in Grodno in 1794

His death and will

Died in 1794, in his will he asked to be buried wrapped in a kosher tallit, contrary to the common custom of disqualifying the tassels of the tallit in which the deceased is wrapped. Rabbi Daniel of Hordana, the local teaching teacher was asked and answered, that although in every other deceased there was a teacher not to keep his will contrary to custom, but for the honor of the deceased he was compelled not to intervene. According to the story, the tassels were finally disqualified when they got entangled in something at the time of burial and were torn off.

He also asked that no words of praise be recounted about him, and that Arba mitot beith din (four court deaths) be held in him.

According to his will, two tombstones were placed for him, one at his head and one at his feet

May the merit of the tzadik Rabbi Alexander Susskind ben Moses of Grodno protect us all. Amen