Rabbi Shlomo Schneur Zalman Schneersohn (1830 – 1900) was a Ukrainian Habad Hasidic rabbi who was the second leader of Kopust Hasidism from 1866 to his death in 1900. 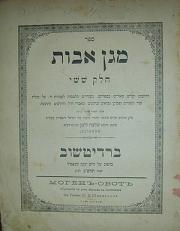 Rabbi Shlomo Schneur Zalman Schneersohn (1830 – 1900) was a Ukrainian Habad Hasidic rabbi who was the second leader of Kopust Hasidism from 1866 to his death in 1900.

He was the son of Yehuda Leib Schneersohn, who founded the Kopust dynasty and was a grandson of the Tzemach Tzedek (the third Chabad Rebbe). He succeeded his father immediately following his death in 1866. He is the author of the 1902 text Magen Avot. He had a son Yehuda Leib.

He was born to Rabbi Yehuda Leib Schneerson of Kapost, in the year 1600. Until he was twelve years old, he studied with his father in the Torah Ha-negle and from then on he studied with his father in the Torah of Chassidut. He married the daughter of Rabbi Yaakov Leib Since then he has lived for ten years in Leifali and locked himself in his room and engaged in Torah and Chassidut. At the end of these ten years, his father-in-law relinquished his property, and Rabbi Shlomo Zalman returned to his parents' house, to Lubavitch.

Rabbi Shlomo Zalman was the grandson of Rabbi Menachem Mendel Schneerson (the plant Tzedek). Five of the sons of the Tzemach Tzedek served as rebbe, while most of the followers of the Tzemach Tzedek became followers of his second son, Rabbi Yehuda Leib (the Maharil), who established the Chabad-Kapost courtyard, located south of Vitebsk (after his father's death). Today in Belarus).

Maharil died six months after his father, but his sons continued to run the Hatzre, headed by his son Rabbi Shlomo Zalman. In  the letter he wrote, he said that his father had restored the crown to its former state, and he intended to continue to do so.

Rabbi Shlomo Zalman served in the Rebbe for thirty-four years. Many of the Chabad followers were his followers. In 1851 he fell ill and traveled to Moscow for his medical needs, but a few days later he returned home and died on the 27th of Iyar.

His son Yehuda Leib was his only son. His successors after his death were his brother, Rabbi Shalom Dover of Merzitza and the Rebbe Rabbi Shmarya Noach of Bobruisk. But most of the Hasidim went to Liadi, to the Rebbe Yitzchak Dover Schneerson, who died in 1859.

May the merit of the tzadik Rabbi Shlomo Schneur Zalman Schneersohn protect us all. Amen