Son of the RAMBAM. 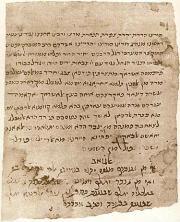 Rambam personally instructed his only son, named for the Patriarch Abraham, and divulged to him many new insights which he had not recorded in his works.

At the age of 19, R' Avraham, who had been born in his father's fifty-first year, succeeded his father as a personal physician to the Sultan and his royal court, and assumed leadership of Egyptian Jewry as the Naggid, a position which placed all Jewish courts under his jurisdiction and made him responsible for appointing suitable rabbis and dayanim.

The new Naggid enacted major improvements in communal affairs. He halted the common practice of bans of excommunication and counterbans being pronounced by every minor functionary against his real or suspected adversaries for the most insignificant slights to his prestige. R' Avraham forbade bans to be pronounced by any but a panel of three dayanim of the authorized beit din of the city. To reverse the lust for honor and prestige which ensnared many public officials he instituted a rule forbidding anyone from sitting in the synagogue with his back to the ark, facing the congregation, considering this posture disrespectful to the Torah.

Like his father before him, R' Avraham received inquiries on religious practice from Eretz Yisrael, Yemen, Provence, Bagdad, Syria, and, of course, Egypt. Only about 130 of his numerous responsa have been preserved in manuscripts and in the halachic works of other authors. Some of them have been published.  Brief , concise, and always to the point, his answers trace the problems to their Talmudic principals and solve them through logical reasoning.

Some of his responsa deal with biblical exegesis, ethical matters, and defense of Rambam's decisions in his code. Two other collections of R' Avraham's responsa are devoted to a rebuttal of Rabbi Daniel HaBavli's arguments against Mishneh Torah (Birkat Avraham, Lyck, 1860; with Mishneh Torah, New York, 1947) and Sefer HaMitzvoth (Ma'aseh Nissim, Paris 1867). When R' Avraham heard of the great polemic against his celebrated father's philosophical views, he rose to the challenge with a spirited defense in an essay entitled Milchamot Hashem, in which he reports that many of the French scholars (among them tosafists) who had visited Egypt were able to understand the Moreh Nevuchim in Rabbi Yehudah al-Charizi's translation and "rejoiced in its discussions."

Only a few chapters remain of his magnum opus, HaMaspik L'Ovdei Hashem ["Sufficient (instructions) for servants of God"]. Presumably this work was a large compendium endeavoring to show the correct way to those who strive for excellence in their service of God. It probably contained halachic sections too. The extant chapters enable us to catch a glimpse of the author's intimate thoughts and nobility of character. The elegance of expression, loftiness of thought, and force of style serve to confirm Rambam's characterization of his son - in a letter to his disciple, R' Yosef ibn Aknin - as,  "one of the most humble people, in addition to his other noble character traits. With God's help, he will unquestionably become famous among the great."

R' Avraham makes a strong case for austerity and asceticism and delineates the advantage of introspective solitude. In the section on Bitachon (trust in God), he anticipates the thought enunciated by many later thinkers that the degree of trust one must have depends upon the spiritual level of the individual and his closeness to God. With practical examples, he demonstrates how this trust should be used to guide the true believer's actions. The remaining fragments of this work have been translated from the original Arabic into English (The High Ways to Perfection of Abraham Maimonides), and into Hebrew.

In his Bible commentary, of which only the books of Genesis and Exodus have survived, R' Avraham stresses the plain meaning and disregards homiletic interpretations. His commentary preserves gems of exegesis by his father - Rambam - and grandfather R' Maimon, besides scores of quotations from the works of the Geonim Rabbi Saadiah, Rabbi Shmuel ben Chofni, and others. An essay on the approach to the Aggadah, known as Ma'amar al HaDerashot, attributed to R' Avraham has been printed many times.

R' Avraham also began a commentary to Mishneh Torah which would cite the source of each decision, and a similar commentary to Moreh Nevuchim, but unfortunately died before he was able to complete them.

He was succeeded as a Naggid by his son , Rabbi David.

May the merit of the tzaddik Rabbi Avraham ben HaRambam  protect us all, Amen.