Rabbi Boruch of Medzhybizh was a grandson of the Baal Shem Tov. Reb Boruch  was the first major "rebbe" of the Hasidic movement to hold court in Mezhbizh in his grandfather's hometown and Beis Medrash, which he inherited. 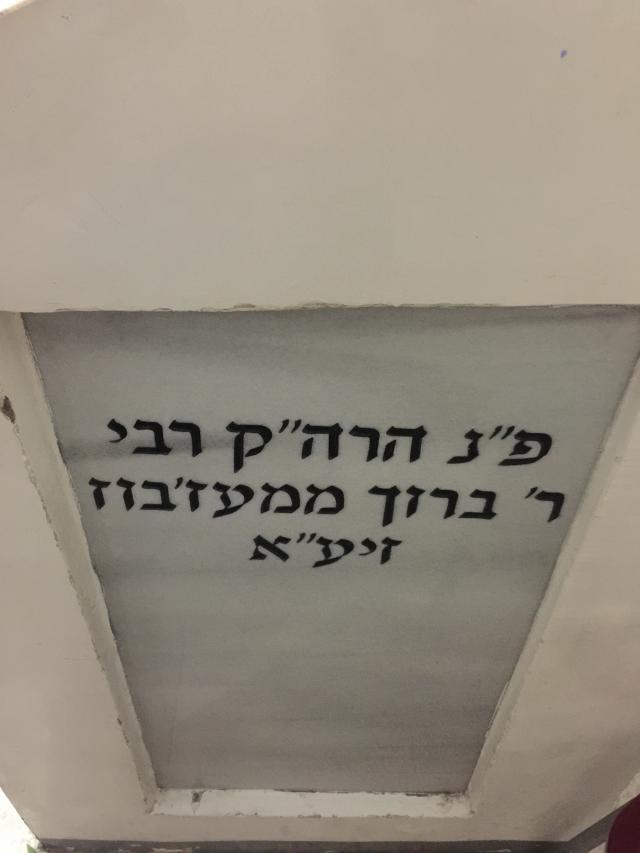 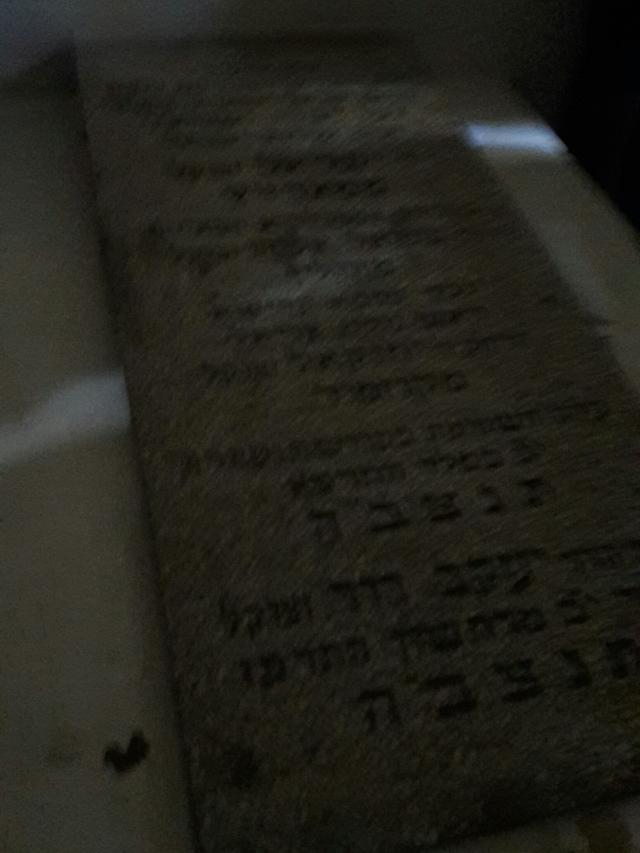 Rabbi Boruch of Medzhybizh (1753–1811), was a grandson of the Baal Shem Tov. Reb Boruch (known in his childhood as Reb Boruch'l, a Yiddish diminutive, and subsequently as Reb Boruch'l HaKadosh) was the first major "rebbe" of the Hasidic movement to hold court in Mezhbizh in his grandfather's hometown and Beis Medrash, which he inherited.

As recorded in the early Hasidic work Mekor Boruch (first published in 1880 from handwritten manuscripts), at the time of the Baal Shem Tov's death, Rabbi Pinchas of Korets and Rabbi Jacob Joseph of Polonoye, two of the Baal Shem Tov's closest disciples, reported to the Hasidim that the Baal Shem Tov had designated Reb Boruch as his successor, and instructed Reb Pinchas to take responsibility to carry out those wishes. Reb Boruch was only seven at the time of his grandfather's death, and was raised in Reb Pinchas' home, where the Baal Shem Tov's other close disciples and other leaders of the Hasidic movement visited regularly to check on his progress and assist with his preparation to assume his grandfather's mantle.

Reb Boruch remained with Reb Pinchas of Korets until the Chevraya Kadisha, as the close inner circle of disciples of the Baal Shem Tov was known, felt that he was ready to become a Rebbe and return to Mezhbizh.

Many of his grandfather's disciples and the great Hasidic leaders of the time, regularly visited the Rebbe Reb Boruch'l as he was called, including the Magid of Chernobyl, the Magid of Mezritch, Rabbi Shneur Zalman of Lyadi (founder of the Chabad Hasidic movement), the Chozeh of Lublin and others.

Reb Boruch was known for his melancholy, fiery temper, and uncompromising strong will. His guiding principle of malkhus was the subject of great debate amongst the Chasidic leadership of his generation. Reb Boruch was the first chasidic leader to accumulate great wealth from his devotees through the practice of petek and pidyonot. In other words, he obtained donations and gifts for personal requests or prayers. He claimed to his followers that he had supernatural powers derived directly from his blood-connection to the Baal Shem Tov.

In 1808, Rabbi Shneur Zalman of Lyadi visited Reb Boruch in Medzhybizh to settle their differences. At the time, Reb Boruch was incensed by his publication Tanya, and by Rabbi Shneur Zalman's insistence that communal funds be given freely to charitable causes. There are numerous stories related to this visit, most ending with Reb Boruch's temper getting the best of him. The visit ultimately resulted in Rabbi Shneur Zalman and his followers being evicted from Podolia.

In his later years, Reb Boruch became overwhelmed by his melancholy. In an attempt to remedy his melancholy, his followers brought in Hershel of Ostropol as a court jester of sorts. Hershel was one of the first documented Jewish comics and his exploits are legendary within both the Jewish and non-Jewish communities. One story has it that in a fit of rage Reb Boruch himself was responsible for Hershel's death. At least one tale has Hershel lingering for several days and dying in Reb Boruch's own bed surrounded by Reb Boruch and his followers.

Rabbi Baruch  was one of the pre-eminent rebbes in the generation of the disciples of the Maggid of Mezritch and had thousands of Chassidim. His brother was the famous tzaddik Rabbi Moshe Chaim Efraim of Sadilkov.

His Torah discourses were written down in Botzinah De'Nehorah (Hebrew).

About Herbs and Healing...

Why are a person's sufferings commanded to act in such a way? It is all for the sake of the herb that has to find it's Tikkun (healing, rectification) by healing the man. When Adam fell from his lofty spiritual level as a result of eating from the Tree of Knowledge, many sparks were toppled and fell below. Every act of eating or drinking serves to restore these sparks to the place where they belong and thus bring the world ever closer to perfection. How can an herb which is bitter and poisonous find it's Tikkun? When it is the appropriate cure for a certain ill man and he takes it using the proper intentions, then the Tikkun is effected and the herb has it's sparks restored. That is what the Sages meant, "by way a of particular person". It refers to the sick person. As R' Baruch said, "the ill man heals the herb".

It was the first night of Chanukah. Outside a snowstorm raged, but inside it was tranquil and warm. The Rebbe, Rabbi Baruch of Mezhibuz, grandson of the Baal Shem Tov, stood in front of the menorah, surrounded by a crowd of his Chassidim. He recited the blessings with great devotion, lit the single candle, placed the shammash ("servant candle") in its designated place, and began to sing HaNairot Halalu. His face radiated holiness and joy; the awed Chassidim stared intently at him.

The flame of the candle was burning strongly. Rebbe and Chassidim sat nearby and sang Maoz Tsur and other Chanukah songs. All of a sudden, the candle began to flicker and leap wildly, even though there wasn't the slightest breeze in the house. It was as if it were dancing. Or struggling. And then, it disappeared!

It didn't blow out—there was no smoke, it just was not there anymore. It was as if it flew off somewhere else. The Rebbe himself seemed lost in thought. His attendant went over to re-light the wick, but the Rebbe waved him off.   He motioned to the Chassidim to continue singing. Several times, between tunes, the Rebbe spoke words of Torah. The evening passed delightfully, and the Chassidim present had all but forgotten the disappearing Chanukah candle.

It was nearly midnight when the harsh sound of carriage wheels grating on the snow and ice exploded the tranquillity. The door burst open and in came a Chassid who hailed from a distant village. His appearance was shocking. His clothes were ripped and filthy, and his face was puffy and bleeding. And yet, in stark contrast to his physical state, his eyes were sparkling and his features shone with joy.

He sat down at the table, and with all eyes upon him, began to speak excitedly. "This isn't the first time I came to Mezhibuz by the forest route, and I know the way very well. But there was a terrible snow storm this week, which greatly slowed my advance. I began to worry that I wouldn't get here in time to be with the Rebbe for the first night of Chanukah. The thought disturbed me so much, I decided not to wait out the storm, but to plod ahead and travel day and night, in the hope that I could reach my destination on time.

"That was a foolish idea, I must admit, but I didn't realize that until too late. Last night, I ran into a gang of bandits, who were quite pleased to encounter me. They figured if I was out in this weather, at night, alone, I must be a wealthy merchant whose business could not brook delay. They demanded that I surrender to them all of my money.

"I tried to explain, I pleaded with them, but they absolutely refused to believe I had no money. They seized the reins of my horses and leapt on my wagon. They sat themselves on either side of me to keep me under close surveillance, and then drove me and my wagon off to meet their chief to decide my fate.

"While they waited for their chief to arrive, they questioned and cross-examined me in great detail, searched me and the wagon, and beat me, trying to elicit the secret of where I had hidden my money. I had nothing to tell them except the truth, and that they weren't prepared to accept.

"After hours of this torture, they bound me and threw me, injured and exhausted, into a dark cellar. I was bleeding from the wounds they inflicted, and my whole body ached in pain. I lay there until the evening, when the gang leader came to speak with me.

"I tried to the best of my ability to describe to him the great joy of being in the Rebbe's presence, and how it was so important to me to get to the Rebbe by the start of the holiday that it was worth it to endanger myself by traveling at night.

"It seems that my words made an impression in him, or else he was persuaded by my adamancy even under torture. But whichever it was, thank G-d he released me from the handcuffs, saying:

" ‘I sense that your faith in G-d is strong and your longing to be with your Rebbe is genuine and intense. Now we shall see if this is the truth. I am going to let you go, but you should know that the way is extremely dangerous. Even the most rugged people never venture into the heart of the forest alone, only in groups, and especially not in a storm and at night. You can leave and try your luck. And I am telling you, if you get through the forest and the other terrible conditions safely, unharmed by the ferocious wild beasts or anything else, then I will break up my gang and reform my ways.

" ‘If you actually reach the outskirts of the city, then throw your handkerchief into the ditch next to the road, behind the signpost there. One of my men will be waiting, and that is how I will know that you made it.'

"I then became terrified all over again. The hardships I had already endured were seared into my soul, and now even more frightening nightmares awaited me. But when I thought about how wonderful it is to be with the Rebbe at the menorah lighting, I shook off all my apprehensions and resolved not to delay another moment. My horse and carriage were returned to me and I set off on my way.

"There was total darkness all around. I could hear the cries of the forest animals, and they sounded close. I feared that I was surrounded by a pack of vicious wolves.

"I crouched down over my horse's neck and spurred him on. He refused to move in the pitch blackness. I lashed him. He didn't budge.

"I had no idea what to do. At that moment, a small light flickered in front of the carriage. The horse stepped eagerly towards it. The light advanced. The horse followed. All along the way, the wild animals fled from us, as if the tiny dancing flame was driving them away.

"We followed that flame all the way here. I kept my end of the bargain and threw my handkerchief at the designated place. Who knows? Perhaps those cruel bandits will change their ways, all in the merit of that little light."

It was only then that the Chassidim noticed that the Rebbe's Chanukah light had returned. There it was, burning in the elaborate menorah, its flame strong and pure as if it had just been lit.

When Reb Boruch died in 1811 on 18 Kislev 5572, his chasidim (followers) numbered in the thousands. He is buried in the Jewish cemetery in Medzhybizh, next to his grandfather the Baal Shem Tov. His writings were included in Amarot Tehorot published in 1865 and in Buzino Dinhora published in 1879.

May The merit of the tzadik Rabbi Boruch of Medzhybizh  protect us all. Amen