Shimon was the Son of Jacob the Patriarch and Leah the Matriarch. He is the founder of the Tribe of Shimon. 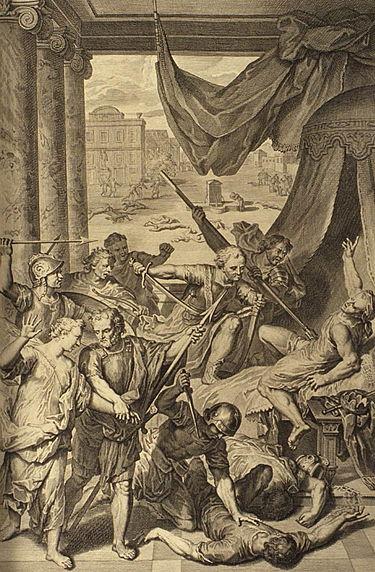 Shimon was the Son of Jacob the Patriarch and Leah the Matriarch. He is the founder of the Tribe of Shimon.

After Joseph was placed in the pit, Shimon gave orders, and they threw big rocks [on Joseph] in order to kill him (Tanchuma, ed. Buber, Vayeshev 13).

[Joseph] took Shimon from them and imprisoned him before their eyes (Genesis 42:24), because it was he who had pushed [Joseph] into the pit. [Moreover, by so doing, Joseph] was separating [Shimon] from Levi so that [the two of them] would not conspire against him. Shimon said to his brothers [who were about to return home without him]. "This is what you did to Joseph, and this is what you wish to do to me!"   "What can we do?" they replied. "Shall members of our households die of starvation?" "Do as you wish," he said. "Now I shall see who will put me in jail." When the warriors approached him, he shouted at them, [whereupon] they fell on their faces and their teeth broke. Then Joseph ordered Menashe, who was sitting before him, "Arise!" Menashe, immediately rose, and with a single blow put [Shimon] in prison and chained him  (Bereishit Rabbah 91:6).

As soon as the brothers had left, Joseph fed bathed and anointed Shimon (Bereishit Rabbah 91:8).

Reuven, Shimon and Levi ruled the Israelites in Egypt. After Reuven died, the leadership was given to Shimon; after Shimon died, it was given to Levi. After Levi died, they sought to give the leadership to Judah, [but] a Heavenly Voice said, "Put aside [Judah's sovereignty] until its time comes" (Bamidbar Rabbah 13:8).

The Tribe of Shimon produced neither judge nor king because of Zimri's sin of immorality (Yalkut Shimoni, Shoftim 42).

May the merit of the tzaddik  Shimon ben Yaakov Avinu  protect us all, Amen.