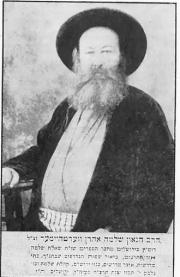 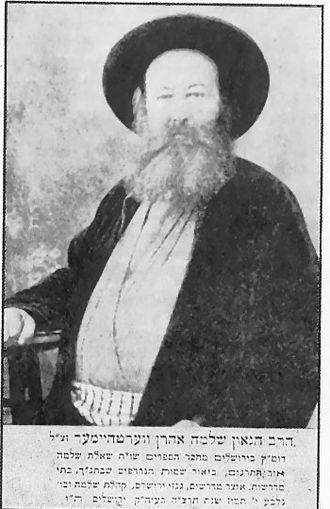 He was born in Bösing in 1866. In 1871 he went with his parents to Jerusalem, where he was educated. By 1890, he was residing in Cairo, Egypt, where he made a living as a rare bookseller and a collector and seller of Cairo Genizah documents. According to Arabist S.D. Goitein, he also published papers on them, but "in a somewhat unscientific way."[ For five years starting in 1893, he tried to sell the British Library Geniza documents for pennies on the dollar, but many were declined.]

He is best known for his midrashic scholarship, his work is one of the two standard midrash compilations from the period (the other is Adolph Jellinek's Bet Ha-Midrasch).

Ebel Mosheh (1885), sermon delivered on the death of Sir Moses Montefiore
Ḥiddushe Rabbi Nissim (1888)
Pirḳe Hekalot and Ẓawwa'at Naftali (1889)
Darke shel Torah (1891), guide to the theory of the Talmud and to the fundamental principles of the Halakah and Haggadah
Ḥatam Sofer (1891), Talmudic studies, with notes; Batte Midrashot (4 parts, 1893-97), a collection of short midrashim from manuscripts, with glosses, notes, and introduction
Ginze Yerushalayim (3 parts, 1896-1902), a collection of scientific, literary, and poetic treatises, from rare manuscripts, with notes and introduction
Midrash Ḥaserot wi-Yeterot (1898), from the Parma manuscript, collated with three Egyptian manuscripts
Leshon Ḥasidim (1898), notes and introduction to the Sefer Ḥasidim
Ḳohelet Shelomoh (1899), a collection of geonic responsa, with notes and introduction, and with Hebrew translations of the Arabic responsa
'Abodat Ḥaleb (1902), a commentary on the Jewish prayers; and Leket Midrashim (1903).
Today, his midrashim are normally printed in a combined two volume set edited by his grandson A. J. Wertheimer. Also entitled Batei Midrashot (Jerusalem: 1967), the work brings together midrashim from Batei Midrashot and Leket Midrash with notes and commentary.

May the merit of Rabbi Solomon Aaron Wertheimer protect us all. Amen