A Kabbalist with prophetic visions. Died on Kidush HaShem, sanctification of God's Name 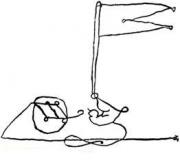 A Kabbalist with prophetic visions. Died on Kidush HaShem, sanctification of God's Name.

Rabbi Shlomo Molcho was a descendant of Portuguese Marranos (Anusim). At the age of 21 he was appointed as a scribe in the royal court. When David HaReuveni (a charismatic Jewish leader,  an impostor who claimed to be a prince of the lost Israelite tribe) visited the royal court, Shlomo who was called Diogo Pires at the time was aroused to return to his ancestral religion. He proceeded to circumcise himself, almost bleeding to death in the process. He then merited a purity of spirit and capability for the study of Torah. He left the luxuries of the palace and escaped from Portugal. He arrived in Italy and soon earned the reputation as a brilliant Torah scholar. He even published 22 essays on the topic of redemption according to the secrets of Kabbalah in his work, Sefer Hamefoar. He met with the Pope and asked him to stop the campaign against the Marranos. He also met Rabbi Yossef Karo in Tzfat  and The Kabbalist Rabbi Yosef Taitzik of Salonica who taught R' Molcho the wisdom of Kabbalah.

Rabbi Shlomo Molcho urged the people to do teshuvah (repentance) in order to bring the redemption, and preached fiery sermons in Eretz Yisrael, Turkey and Italy, encouraging the messianic hopes of many Jews. His influence grew when he predicted the flood that devastated Rome and the earthquake in Portugal. His speeches inspired many Marranos to publicly return to their faith.

Eventually, though, the Inquisitor arrested him and sentenced him to capital punishment. He was spared through the intervention of  Pope Clement VII and continued his work. He turned down the opportunity to escape to the nearby Ottoman Empire and live under its protection, in order to remain and inspire the hearts of his brethren. He even met the Caesar and suggested that he convert. Again, however, he was arrested by the officers of the Inquisition. They offered to spare his life if he would convert to Christianity, but R' Molcho refused to recant his faith. He proudly declared, "I was once already considered as a member of your faith, and I was privileged to distinguish between falsehood and the true religion. The One God is worth happily giving our lives for!" As he recited Shema with great joy, he was burned at the stake.

R' Shlomo Molcho's death for the sanctification of God's Name was the envy of Maran Rav Yossef Karo.

May the merit of the tzaddik  Rabbi Shlomo Molcho protect us all, Amen.