Tana, student of Rabbi Akiva. Author of the Zohar, the main text of Kabbalah. 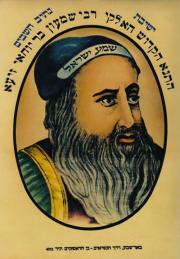 Rabbi Shimon Bar Yochai, the saintly Tanna of the mishnaic period and author of the Holy Zohar, was a disciple of Rabbi Akiva. Rabbi Akiva was put to death by the Romans for studying Torah. Rabbi Shimon Bar Yochai, who attacked the Romans for their cruelty and evil, was himself condemned to death.
Together with his son Rabbi Elazar, he went into hiding in a cave in the mountains near Peki'in in the Galilee, where they stayed for 13 years. The Talmud in Shabbat 33b relates that a miracle occurred and a carob tree and a well of water were created for them, to provide them with food and water. They were often visited in the cave, by Elijah the Prophet and Moses who taught them the deepest secrets of the Torah. During their 13 years in seclusion, R' Shimon wrote the holy Zohar, which forms the basis of Kabbalah.

The Sefer HaZohar (Book of Splendor) deals with the mystical aspects of the Torah  and is the key to understanding the very principles governing the whole creation - both seen and unseen. Penetrating its mysteries concerning God, Man, Israel, the Divine Light and its emanations (Sefirot), and many other esoteric themes requires a great effort, but the rewards are just as great!

This great body of mystical knowledge was given orally by God to the Jewish people on Mount Sinai. With the passage of Israel's history, these teachings were lost to most people, until R' Shimon fearing a permanent loss of this knowledge recorded them in the Zohar.
After being hidden for a 1000 years, the Zohar was rediscovered by Rabbi Moshe de Leon in Spain, in the 13th century.

According to the Ari, R' Shimon was granted permission to write the Zohar because, more than any one of his predecessors, he had the ability to clothe protect and reveal its mystical teachings. The Zohar has enriched Jewish spiritual life immeasurably. In the words of Rabbi Moshe Chaim Luzzato, "after the 13 years he spent in the cave, the Gates of Wisdom were opened for him, in order to provide light for all Israel, until the end of time."

The very obscure Arameic of the Zohar has been explained and translated into Hebrew by Rabbi Yehuda Ashlag (HaSulam), 50 years ago.

Aside from the Zohar, R' Shimon also plays a major role in the Talmud and Midrash.

Many loyal followers visit his grave in Meron on his "day of departure" on Lag Ba'Omer. they shoot bows and arrows, because R' Shimon was so righteous, no rainbow (the 'reminder' of God's promise not to destroy the world even if there is no righteousness), appeared during his lifetime. Bonfires are lit, in memory of the brilliant, supernatural flame which illuminated his home until shortly before his departure. Another aspect of the celebration is the first haircut given to three-year old boys on Lag Ba'Omer at Meron (Chalakah).
http://m360.co.il/tours/nrg360/meron/meron.html
May the merit of Rabbi Shimon Bar Yochai protect us all, Amen.