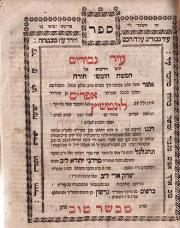 Shlomo Efraim was a disciple of  Rabbi Shlomo Luria (Maharshal), the famous talmudist and author of Yam Shel Shlomoh. After leading the yeshivah in Lvov, Rabbi Shlomo Efraim was appointed rabbi of Prague. He sat on the rabbinical court of that city with Rabbi Yeshayah Horowitz (the "Shelah Ha'kadosh"). Among R' Ephraim's prominent students were Rabbi Yom Tov Lipman Heller, author of the Mishnah commentary Tosfot Yom Tov, and Rabbi Shabtai Horowitz, son of the Shelah.

A spellbinding orator, he inspired his listeners with fiery sermons, which were published. His most important work is the popular commentary on the Torah, Kli Yakar ("The Precious Vessel"), in which he expounds the text in a homiletic style. It is very readable and has a captivating quality. It is published in many editions of the Chumash, including Mikraot Gedolot.

Rabbi Shlomo Ephraim records that his book Olelot Efraim was written when he lived in Jaroslaw and had no library. All of the numerous citations and quotations to the Talmud, midrashim, and commentaries that are in that work were written down from memory.

He also composed selichot / penitential prayers to be recited on the second day of Adar, the anniversary of a pogrom which occurred in Prague on that day in 1611.

Legend recalls that when the Maharal of Prague lay on his deathbed (in 1609), he told his followers, "Go to Lvov and find a man by the name of Ephraim Olelot. He will be your rabbi in my place." A delegation from Prague traveled to Lvov and were surprised, as was their host in Lvov, to find that the Maharal had appointed a simple laborer to be his successor. (It is not clear how this legend can be reconciled with the report that R' Ephraim headed a yeshiva in Lvov.)

He was named Efraim at birth. The name Shlomo was added during an illness in 1601.

May the merit of the tzaddik  Rabbi Shlomo Efraim of Luntchitz  protect us all, Amen.