Served as Kohen Gadol (High Priest), after the death of his father Aharon HaKohen. His son was the famous, Pinchas HaKohen. 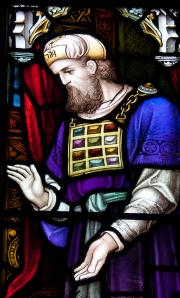 Elazar...took himself one of the daughters of Putiel as a wife (Exodus 6:25). Her father was [descended] from Joseph and her mother from Yitro (Jethro), or vise versa (tractate Bava Batra 110a).

Before the decree [that all men of Israel would die in the desert] was issued, Elazar was at least 30 years old (Bamidbar Rabbah 3:7).

At the sight of Elazar and Pinchas, both high priests, weeping over the death of Aharon, who would not weep? (Avot d'Rabbi Natan).

Elazar HaKohen said...(Numbers 31:21). Moshe gave Elazar HaKohen permission to speak so that when Moshe would depart this world, people would not say to [Elazar], "In the lifetime of Moshe your teacher you did not speak [words of Torah law], and now you speak?" (Sifri Matot 157).

Elazar was wearing the Urim VeTumim. Joshua and all of Israel stood before him, and [two] lottery urns, one containing the names of the Tribes and one the names of districts [of the Land of Israel], were placed before him. Elazar directed his thoughts through Divine Inspiration and said, "Zebulun is coming up and the district of Acco (Acre) is coming up with him." Then he took the urn of Tribes and Zebulun came into his hand; he shook the urn of districts and the district of Acco came into his hand (tractate Bava Batra 122a).

May the merit of the tzaddik  Elazar HaKohen  protect us all, Amen.