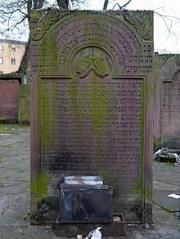 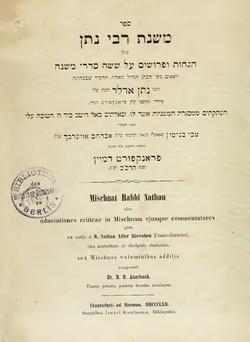 According to tradition, the family name of Adler (eagle) derives from the heraldic design (embodying an eagle) on the flag of the old city of Frankfurt. This flag was carried by one of Adler's ancestors in the triumphant procession of Jews returning to Frankfurt after their re-admission in the 17th century. Nathan Adler descended from the 13th century Frankfurt sage, Rabbi Shimon Hadarshan-Ashkenasi, the author of Yalkut Shimoni. Adler was a pupil of Rabbi Yaakov Yehoshua Falk ("Penei Yehoshua") and David Tebele Schiff, later Rabbi of the Great Synagogue in London.

Adler lived a saintly life and adhered to the Chassidism of the Ari HaKadosh. He established the Sephardic Minhag in his private Synagogue, introduced the "Blessing of the Priests" in the weekly service, and used the Sephardic pronunciation in his prayers. The Frankfurt Community, remembering the damage done by the false Messiahs Shabbetai Tzvi and Yaakov Frank (in the neighboring town of Offenbach), strongly opposed his Kabbalistic leanings and finally excommunicated him. This cherem was lifted only a few weeks before Adler's death.

With the exception of his appointment at Boskowitz, Moravia, (1782- 1785), after which he returned to Frankfurt, Nathan Adler never officiated as Rabbi. Nor did he publish his marginal glosses on the Mishnah, Gemara and Shulchan Aruch. It was due to the loyalty of his pupils that some of his interpretations have survived.

May the merit of the tzaddik Rabbi Natan Adler  protect us all, Amen.