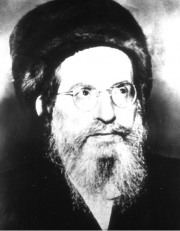 Rabbi Yehudah Leib Ashlag, the great contemporary Kabbalist gained worldwide acclaim for his monumental work HaSulam, an interpretive Hebrew translation of the Zohar that makes its obscure Aramaic text accessible to students of this holy book.

Rabbi Yehudah Leib was a Chassidic leader, but unlike most Chassidic rebbes he was not a descendant of a Chassidic dynasty. Very little is known about his early years. By the time he was thirteen years old he had a thorough knowledge of the entire Talmud. He became a Chassid of Rabbi Meir Shalom of Kalushin and often traveled to Belz to be in the presence of the Belzer Rebbe, Yissachar Dov.

As a young man, he served as rabbi of a Warsaw congregation. However, after making the decision to devote himself to the study of Kabbalah, he gave up his position, withdrew form worldly pursuits, and lived in abject poverty. He was so poor that his commentaries were written on scraps of paper.

A deep mystery surrounds the person who introduced Rabbi Yehudah Leib Ashlag to the teachings of Kabbalah. the only information we have is contained in a letter by Rabbi Ashlag where he writes, "On Friday, the twelfth of Marchesvan, 1919 a certain person visited me... I immediately sensed that he was a holy man. He promised to reveal to me the wisdom of Kabbalah in all its facets. I studied under him for about three months..."As I became more proficient, my saintly master gradually withdrew, until at the end of three months he disappeared altogether. I went looking for him, but could not find him. on the morning of the ninth of Nissan I found him, at which time he revealed  to me a deep mystery, which made me ecstatic...Since he appeared to be very faint I stayed with him and did not leave his house. The next day, the tenth of Nissan, 1919, my saintly master passed away. he was a prominent Warsaw businessman, admired for integrity, but no one knew that he was a great Kabbalist. He made me promise not to reveal his identity to anyone."

In 1922 Rabbi Yehudah Leib  settled in Yerushalayim. There he lived with his family in a small attic apartment on a narrow alley near the Western Wall and pursued his studies of Kabbalah in Yeshivah Chayei Olam. Before long, his extraordinary piety and extensive knowledge of chochmat nistar (mysticism) were recognized, and a group of young disciples eagerly listened to his profound Kabalistic expositions on the Zohar  teachings of the Ari, as set forth in Etz Chaim. But extreme poverty forced him to accept a rabbinic position in Givat Shaul, a new  section at the outskirts of Yerushalayim, where he established a beis midrash and kollel named Ittur Rabbanim. His lectures on Kabbalah, given in lucid and systematic format, drew large audiences of devoted followers.

In the final decade of his life, Rabbi Yehudah Leib lived in B'nie Brak and Tel Aviv. It was there that he completed his magnum opus HaSulam (The Ladder), a twenty-one-volume interpretive Hebrew translation of the Zohar, with a comprehensive introduction, which provides the key to the Zohar's  Kabbalistic concepts. He explains the title HaSulam by saying: "A person might have an attic filled with precious jewels. All he needs is a ladder a gain access to these treasures."

Rabbi Ashlag's work bears a glowing approbation from Rabbi Yosef Chaim Sonnenfeld, chief Rabbi of the Ashenkenazi community of Yerushalayim, who describes him as " one of the outstanding scholars of Yerushalayim, who studies the Torah lishmah  for its own sake." Rabbi Avraham Mordechai Alter, the Gerrer Rebbe (known as the Imrei Emes) also praised the work. Another laudatory approbation is from Rabbi Chaim Shaul Dewick,  head of the Kabbalistic scholars in Yerushalayim.

On Yom Kippur 1955, Rabbi Yehudah Leib Ashlag passed away. He was survived by two sons- Rabbi Baruch Shalom, who died in 1983, and Rabbi Binyamin who established a kollel in B'nie Brak, where he spreads the teachings of Kabbalah among Chassidim and students of Kabbalah.

May the merit of the tzaddik  Rabbi Yehudah Ashlag protect us all, Amen.