Rabbi Aryeh Moshe Eliyahu Kaplan was an American Orthodox rabbi and author known for his knowledge of physics and kabbalah. 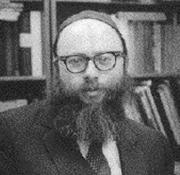 In his prolific but brief career, Rabbi Kaplan produced over 60 works. His genius and unique abilities produced many of the great classics of contemporary Jewish philosophy. The recent upsurge of interest in Kabbalah is indebted, to a large degree, to his ground-breaking translations of obscure kabbalistic works, as well as his own original works in this field. These works are gaining more popularity now than they were two decades ago, when they were written.

Rabbi Kaplan was educated in Torah Vadaath and Mir Yeshivot in Brooklyn (New York). After study at the Mir Yeshiva in Jerusalem, he was ordained by some of Israel's foremost rabbinic authorities. He also received a master's degree in physics and was listed in the Who's Who in Physics.

I would like to share with you, however, not a biographical sketch of Rabbi Kaplan, but rather some personal glimpses into one of the most extraordinary personalities in the last few decades.

My wife Michelle and I first met the Kaplan family shortly after our marriage in 1975, at a simcha in Borough Park, Brooklyn. Over the next 8 years, we were to become close friends with him and his family. We moved into the Kensington neighborhood of Brooklyn mainly to live near the Kaplans, and we attended many shabbat learning sessions Friday night at his house. I also spent many shabbat afternoon's at his house discussing his works and topics of Jewish interest.

We had met Rabbi Kaplan before his books on Kabbalah were published. When we met, he was working on an English translation of the Ladino classic, Me'am Lo'ez. I was to find out later he was working on many books, simultaneously. One time, as we sat talking about Kabbalah, he confided in me. "I began translating the works of Kabbalah, to some extent, because a Jew is going to walk into an occult bookstore looking for something about Kabbalah, and hw is not going to find anything traditionally Jewish."

One day my wife made a suggestion to Rabbi Kaplan "There are so many books out on meditation, but nothing Jewish. Why don't you write something about Jewish meditation?"

"That's a great idea1" he remarked. In typical Kaplan "fast-forward," a few weeks later he asked us if we wanted to see the manuscript! Little did my wife know at the time that to her credit, she helped inspire what has now become one of the classic texts for the Jewish meditator and spiritual seeker.

One of the little known facts about Rabbi Kaplan's writing career is that, amazingly, it was all done before the advent of word processing. I can still remember him pecking away at that old manual typewriter!

There is a lot to say about Rabbi Kaplan's genius, of course. What impressed me the most was his ability to present what I would call the "Big Picture" of Judaism. One of his best and most obvious illustrations of his ability can be found in his monumental classic, the Handbook of Jewish Thought.

Rabbi Kaplan was not content to just quote the more well known classical sources, as is the wont of many. He was gifted with the uncanny ability to quote and reconcile the seemingly conflicting material of our Oral tradition. He would weave Midrash, Halacha, Talmud and Kabbalah into a beautiful tapestry, a picture that would inspire the minds and hearts of his readers.

Most important are his original thoughts, based on traditional sources. These are most often reflected in the footnotes to his works, as the discerning reader soon discovers. To any serious student of R' Kaplan it is important to pay careful attention to his footnotes. For within his own notes, the savvy, discerning reader will come into contact with the originality, humor, and subtlety of the author's own thoughts.

There is a lot to say about R' Kaplan's genius and his vast knowledge of Torah. Ultimately, the most lasting and endearing impression that he left with me was his teaching style. I would describe it as simultaneously both "laid-back" and intense, as those who studied personally with him will attest. Of course, always shining through was his utmost humility. If he didn't know the answer to a question, he would just say: "I don't know." A perfectly good answer in Jewish tradition.

R' Kaplan was very cognizant of the need for Jewish outreach. Many of his early writings for college youth were geared as an introduction to the basics of the Jewish religion. Yet even those seemingly simple books contain many profound concepts. It is highly likely that many who became endeared to his writings have found their way back into Judaism through the influence of his works. His outreach, needless to say, goes on even today, with each and every one of his readers.

I often think R' Kaplan was like a comet in the sky that shot past us so fast that we hardly had time to make a bracha. As I read his books, I can see his face and my mind feels with memories of that gentle giant whose mind could roam the cosmos of Torah, and yet be ever so close to all.

May the merit of the tzaddik  Rabbi Aryeh Kaplan  protect us all, Amen.