Early Hassidic leader,  set up his own court in Lechovitz. 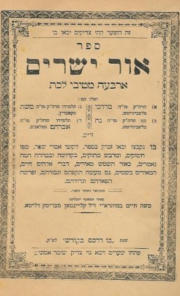 Rabbi Mordecai was born in Nesvizh, Belarussia and was a direct male-line descendant of Rabbi Mordechai Yoffe (1530 - 1612), the Prague-born rabbi known as the Levush for his work of commentary on the Shulchan Aruch. Both Rabbis Mordechai were direct descendants of Rashi.

Rabbi Mordechai of Lechovitz was a disciple of Rabbi Shlomo of Karlin. Karlin Hasidism was the first, and for a long time, the only, branch of Hassidism to take root in Lithuania-Belorussia. Because of the strong opposition to Hasidism on the part of the Vilna Gaon, Lithuania-Belorussia was not very fertile soil for the Hassidic movement, and the Hasidic sects that successfully took root adopted many of the customs of their opponents, such as their manner of dress. The Lechovitz Hassidic court, however, like the Karlin court had a unique style of prayer, which was loud, intense and emotional.

Rabbi Mordechai also travelled to the courts of Rabbis Yithchak Levi of Berdichev and Baruch of Medzhibov. With the 1792 murder of Rabbi Shlomo of Karlin, Rabbi Mordechai set up his own court in Lechovitz. His followers were estimated to number in the thousands. The opposition of the Mitnagdim at this time was ferocious. They not only issued bans of excommunication on Hasidim, but in 1798, they managed to get the Russian authorities to arrest Rabbi Mordechai along with Rabbi Schneur Zalman of Liadi (first Lubavich Rebbe) and Rabbi Asher of Stolin (then leader of the Stolin-Karlin Hassidic dynasty). The charges were found to be baseless and the three were released after several months.

Rabbi Mordechai was appointed by Rabbi Avraham Kalisk to serve as president of the Holy Land Fund, representing Belorussia, Lithuania and Russia, and traveled to raise funds for the support of the Hassidic community in Israel. Rabbi Mordechai passed away while on the way to the wedding of his grandson, Rabbi Shlomo Chaim Perlow to the granddaughter of Rabbi Shlomo of Karlin.

Rabbi Mordechai’s son. Rabbi Noach, succeeded him as Rebbe and assumed his role at the Holy Land Fund. His other son, Rabbi Aharon was the son-in-law of Rabbi Asher of Stolin, and pre-deceased Rabbi Mordechai. Rabbi Mordechai's son-in-law was Rabbi Chaim Heikel of Amdur.

Some of Rabbi Mordechai’s homilies are printed in Ohr Yesharim, a compilation of the discourses of the Lechovitcher Rebbe’s.

Being an early Hassidic leader, there are many folk-tales about Rabbi Mordechai and many folksy sayings attributed to him. The most often repeated is: All worrying is forbidden, except to worry that one is worrying. Another: A chavruta [partner in the study of sacred texts] is like a stone; a stone in itself has no value, but when you start rubbing one stone on another, sparks fly. Lastly: If only hedonists knew about the great pleasures that good deeds bring, they would dedicate themselves to the fulfillment of Torah and its commandments.