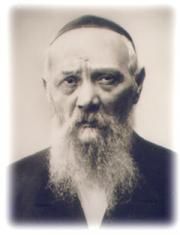 Rabbi Levi Yitzchak was born on the 18th day of Nissan, 5638 (1878) in the town of Podrovnah (near Gomel) to Rabbi Baruch Schneur and Zelda Rachel Schneerson. His great-great grandfather was the third Chabad Rebbe, Rabbi Menachem Mendel Schneersohn of Lubavitch.

In 1900, Levi Yitzchak married Chana Yanovski, whose father, Rabbi Meir Shlomo, was the Rabbi of the Ukrainian city of Nikolaiev. In 1902, their eldest son, Menachem Mendel was born. He was later to become the Rebbe of Lubavitch.

Schneerson lived in Nikolaiev until 1909, when he was appointed to serve as the Rabbi ofYekatrinoslav. In 1939 he was arrested by the communist regime for his fearless stance against the Party's efforts to eradicate Jewish learning and practice in the Soviet Union, and particularly for distributing Matzah to the Jews of Yekatrinoslav. After more than a year of torture and interrogations in Stalin's prisons, he was sentenced to exile to a remote village Chiali in Kazakhstan. Shortly before his death, Levi Yitzchak was able to move to Almaty, where he was warmly welcomed by the smallLubavitcher community. There he died on the 20th of Av, 5704 (1944). Rabbi Levi Yitzchak was buried at a cemetery in Almaty. A Chabad Lubavitch synagogue named in his honour has been built near his gravesite.

Schneerson was a distinguished Kabbalist. Some of his writings have been published in a five volume set under the name Likkutei Levi Yitschok. Most of it, however, was burned or confiscated by the Soviet authorities, and has yet to be returned to the Chabad movement.