Rabbi Yaakov Culi (a.k.a. Kuli or Chuli) was a Talmudist and Biblical commentator of the seventeenth and eighteenth centuries . He belonged to an exiled Spanish family, and was the grandson and pupil of Moses ibn Habib 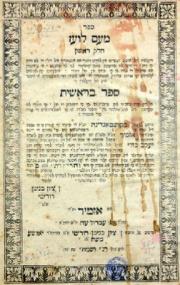 Rabbi Yaakov Culi (a.k.a. Kuli or Chuli) was a Talmudist and Biblical commentator of the seventeenth and eighteenth centuries . He belonged to an exiled Spanish family, and was the grandson and pupil of Moses ibn Habib He edited various important works. The first fruit of his literary activity was the publication of his grandfather's writings. To this end he left Safed, where he seemed to have taken up his abode, and relocated to Constantinople. While engaged on the works of his grandfather, he entered (1714) into close relations with the chief rabbi of Constantinople, Judah Rosanes (also known simply as Mishne La' Melech),

The brilliant young scholar quickly came to the attention of the chief rabbi of Constantinople, Yehuda Rosanes, the undisputed leader of Sephardic Jewry at the time, and he was appointed to the beth din (rabbinical court).

At the time generally regarded the highest authority of the Orient. Rosanes appointed Culi dayan, which, together with his position as teacher, secured to him a sufficient livelihood. In 1727 Choli published his grandfather's work "Shammot ba-Arez", a book of notes on various portions of the Talmud.

In that year Rosanes died. He left voluminous literary remains in a very chaotic condition. To introduce order into this chaos a scholar of the first rank was needed. Choli was entrusted with this task. But even for him it meant a labor of several years. First, in 1728, he edited Rosanes' book "Parashat Derakim," a work both midrashic and halachic in content. Three years later he finally published Rosanes' voluminous "Mishneh la-Melek", one of the most famous commentaries on Maimonides' Mishne Torah, enriched with numerous important notes of his own. To both these works Choli wrote a preface.

In the same year, he edited also his grandfather's "'Ezrat Nashim," in the beginning of which there are two responsa of his own.

His most important work is his commentary on the Torah, entitled "Me'am Loez", written in Salonika. This work, which is held in high regard by the Jews of the East, is a very elaborate encyclopedic commentary in Ladino, dealing with Jewish life in all its relations. Its material was taken from the Talmud, the Midrash, and early rabbinic literature. However, Rabbi Choli only managed to write his work on Genesis and on two-thirds of Exodus before he died. Because of the overwhelming popularity of the "Me'am Loez", other prominent rabbis of Turkey took over this endeavor and completed the remaining volumes.

Choli also wrote a halakic work under the title "Simanim le-Oraita," which, however, remained in manuscript.

May the merit of the tzadik Rabbi Yaakov Culi protect us all. Amen