Kabbalist , was renown for his modesty and gift of prophesy 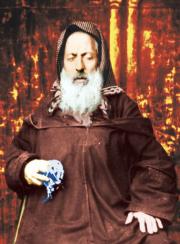 By way of pious habit, he used to collect money from people for distributing to the poor, and after having finished allocating the funds, he would wash the scarf used for the collection. Once he was asked why he did this, and he replied that there was nothing filthier in the world than money: “I wash my scarf, therefore, to cleanse it of this dirt!” Indeed, he lived from the money that people gave, yet he always said, “Money is filthy!”

He had yet another pious habit. Every day he would come to the home of a poor person and ask, “What did you prepare today to eat? I would like to taste what you cooked!” We know very well what a poor person eats: Vegetables, a piece of bread (or else some bread with tea and a salad of vegetables), and that’s it. The saintly Rabbi Pinto, may he rest in peace, sat down with them, ate of their bread, brought them joy, and blessed them upon leaving. He didn’t always like to eat at the table of the rich. He would say that the Shechinah and blessing reign over the table of the poor more than over that of the rich. He would say that the fear of G-d was acquired precisely in destituteness and poverty, not in prosperity.

Rabbi Haim Pinto was renown for his modesty and gift of prophesy, as testified by the following personal accounts:

Once when I was at home, my cousin came to get me and said, “Aziza, you absolutely have to come to our house!” I said, “Good!” and I went and saw that Rabbi Haim Pinto was there. When I saw him, He welcomed me five times.

I answered him, “May G-d bless you,” and he told me, “You will give birth! You will have a child in two days. You will bring a girl into the world who will become rich!” (As it turned out, I had a girl two days later). He then said to me, “By the merit of my father and of my grandfather, you will have a girl! You already have a son who is at home. You will have a girl and you will recover easily after giving birth. You will give birth without pain, and then you will have a beautiful naming ceremony!” And really, two days after having spoken to the Tzaddik, I came back home with discomfort. The next day I had a girl, and since that time we’ve lived better than ever. After that – oh yes, I forgot – he had told me, “After having a girl, you will bring a boy into the world, but please, do not give him the name of your father!” My father had already died, yet I still named my son after him. One year later, my son died. He had yet clearly told me, “The son you will have will be lost!”

The story that I will recount to you occurred in Casablanca 37 years ago [this account was taken in 1974], just before the passing of Rabbi Haim Pinto. The majority of those in the Moroccan community knew this holy man, and the most part of these were still alive at that time and spoke of his merit. They say that before his departure from Mogador to Casablanca, people in the city were used to going to his home on Saturday night for Melava Malka. On that night rabbis, elderly people, and women & children could be found there. After Saturday night prayers, he got out his violin and began singing the poems of his holy grandfather and Rabbi Israel Najara. It happened several times that he forgot himself and, without noticing, played until dawn. Afterwards he would say to his listeners, “I’m tired, and you should be too. Go to sleep, for you have to get up for morning prayers!” They replied to him, “Day has already arisen. It’s time to pray!” They performed the morning service, had breakfast, and left. The rabbis of the city looked for an explanation to the following puzzle: Sometimes, certain verses of the poem that Rabbi Haim Pinto sang made him tremble, and all his listeners felt this emotion as well. The saint gave no explanation for this, and when people insisted that he speak, he got upset and said, “If you ask me once again, I will continue to refuse and no longer agree that you assemble in my home on Saturday night!” The rabbis asked his forgiveness and left. No one asked him any more questions about these things. They had understood the greatness of the saint.

Once, he received a letter (I’m speaking of Rabbi Haim Pinto Hakatan) from a rich man living in Rabat who asked him to find a young man who was honest and well-versed in Torah to marry his daughter. Rabbi Haim Pinto asked himself who would be a suitable young man in town, one that was honest and learned. Days passed and he still hadn’t decided on a candidate. Then one night he couldn’t sleep, and so he went out with his servant in the middle of the night to the Mellah [the enclosed Jewish district of the city], and there he saw people leaving a synagogue. He entered and found a young man sitting down, studying Tractate Yebamot (a tractate in the Talmud) with great diligence. The saint said to his servant, “Let’s leave the synagogue so as not to disturb him. If he sees us, he will stop studying and we will be responsible for this interruption of Torah study!” They walked along the Mellah and encountered a Jew who invited them to have coffee in his home. The saint (may he rest in peace) accepted and they entered his house. Some time later, they left and went to the synagogue to see what was happening with the young man. As soon as they entered, they saw him lying on the floor, sleeping the sleep of the righteous. The saint said to his servant, “This young man is accomplishing the word of the Tanna [a Sage of the Mishnah]: ‘Sleep on the ground.’ Don’t disturb him. Tomorrow morning you will bring him to me!” The next day he questioned the young man: “Have you no place to sleep?” He replied, “I’m an orphan and my friends at the yeshiva bring me food to eat. I come from another town.” He asked him his age, and he replied, “Twenty-six years old.” The saint said to him, “You are old and you should get married!” The young man replied, “I can’t even meet my own needs. How can I get married?” The saint gave him some money to buy new clothes and sent him to Rabat, where the rich man married him off to his daughter. The couple brought forth boys and girls into the world, and the young man pursued his studies. Today he lives in Amsterdam. I paid a visit to him there and it was he who personally told me this story.

May the merit of the tzaddik Rabbi Chaim Pinto  protect us all, Amen.