Rabbi Aryeh Levin, known as Reb Aryeh, was an Orthodox rabbi dubbed the "Father of Prisoners" for his visits to members of the Jewish underground imprisoned in the Central Prison of Jerusalem in the Russian Compound during the British Mandate 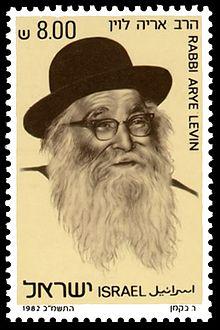 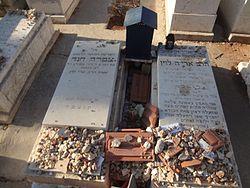 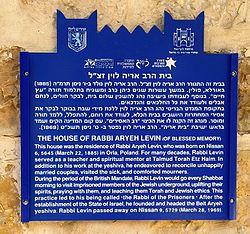 Rabbi Aryeh Levin, (March 22, 1885 - March 28, 1969), known as Reb Aryeh, was an Orthodox rabbi dubbed the "Father of Prisoners" for his visits to members of the Jewish underground imprisoned in the Central Prison of Jerusalem in the Russian Compound during the British Mandate. He was also known as the "Tzadik ("saint") of Jerusalem" for his work on behalf of the poor and the sick.

Reb Aryeh was born near the village of Orla, near Białystok, Russian Empire (now Poland) to Binyamin Beinish and Ethel Levin. He had two older sisters, Miriam and Faige. From his father, Aryeh acquired a love of Torah learning. He was tutored by local teachers until the age of 12, and then left home to attend the great yeshivas of Slonim, Slutsk, Volozhin and Brisk. In 1905, he immigrated to what was then Ottoman Palestine. Soon after he moved to Jerusalem, he married Tzipora Hanna, the daughter of Rabbi David Shapira.

Father of the Prisoners

In 1931, at the request of the British Mandate, Chief Rabbi Abraham Isaac Kook appointed Reb Aryeh Levin the official Jewish Prison Chaplain, a position he informally had filled since 1927. He accepted on the condition that he receive no pay. He would walk from his home in Nachlaot to visit the Jewish prisoners held in the Russian Compound on charges of arms possession or smuggling. Most of the prisoners were members of the Palmach, Haganah, Irgun or Lehi.Levin prayed with the prisoners and conveyed messages to their families. Room 29 in the Central Prison in Jerusalem (now the Museum of the Underground Prisoners), was used as a synagogue on Shabbat and holidays. The inmates were captivated by the rabbi's warmth and sincerity, and the honor and respect with which he treated them. Mattityahu Shmuelevitz, whose death sentence was commuted to life imprisonment, wrote in a letter to a friend: “Yet there is one person in particular to whom I remain grateful first and foremost; a dear, precious Jew about whom you told me nothing; but it was he who stormed heaven and earth for me; and more important — it was he who brought me closer to my Maker in those fateful days... He left and we remained in the prison. He couldn’t take us with him out into the free world, but he always brought the outside world in to us.”

"Reb Aryeh's eyes radiated love and comradeship, and he spoke soft and soothing words of encouragement to those imprisoned. Even the most stubborn prisoners succumbed to his simple, untainted love for his fellow man. The most heartbreaking situation he encountered was the predicament of the prisoners who were condemned to death. Rav Aryeh made every effort to appeal the sentences and reduce the punishment. Once he even threw himself in front of the High Commissioner’s moving limousine in order to present his petition to him. Concerning those he could not save, like Dov Groner, Moshe Barazani, and Meir Feinstein, Rav Aryeh said: “None of us has any idea how high is the spiritual rank of these martyrs.”

In 1965 (5725), Rabbi Levin was honored at a ceremony assembled by the veteran underground resistance fighters from the Mandate period. Timed to take place on his eightieth birthday, it was held in the courtyard of the old central prison in the Russian Compound. Reb Aryeh stood up to speak. He stated, “The importance of this assembly is that it has brought friends together. Moreover, this good meeting is taking place on the other side of the prison bars... It particularly makes my heart glad to see the families of the prisoners, especially the little children, since I have always loved small children.” Then he added, “I do not know if I shall be privileged to be with you again like this. All I ask of you is this: Tell your children: There was an old Jew in Jerusalem who loved us so very much!”

With that, he burst into tears, and among the thousands of people there, not a dry eye was to be found.

R' Aryeh Levin was also known for his visits to the sick, especially patients who had no family of their own. "It was Reb Aryeh's practice to go to the hospitals of Jerusalem every Friday, to visit the sick who were confined there. First he would always go and speak with the nurses, to find out from them which patients received no visitors as a rule. At the beds of these forgotten souls whom no relatives came to see, he would linger, caressing each one's hand and giving him words of encouragement and cheer. He would sit for hours near the beds of the sick, especially at Bikur Cholim hospital in Jerusalem."

"He was also a frequent visitor at hospitals for lepers, including a hospital in Bethlehem, where most of the patients were Arabs. Reb Aryeh began this holy practice after he had found a woman weeping bitterly by the Western Wall. Reb Aryeh asked her what made her cry so intensely. She told him that her child had no cure, and was locked up in the leper hospital in Jerusalem. He immediately decided to visit the young child, and when he arrived, all the patients burst into tears. It had been years, since they had the privilege to see any visitor from the outside world."

"His pious wife Chana Levin, cooked regularly for them, and he would take the prepared food to the hospital."

After the 1947–1949 Palestine war, Rabbi Levin conducted a little used ritual known as Goral Hagra in order to identify the mutilated remains of 12 Jewish fighters of the Convoy of 35

Reb Aryeh was known for his sublime character traits of "humility, kindness, and respect for all." "Reb Aryeh was humble toward everyone. He treated everyone he met with love, respect, and dignity." "He saw only the good in human beings, even those for whom others rarely had a kind word." "Reb Aryeh Levin was perpetually involved with deeds of charity and helping the poor." "

He lived with modesty and simplicity. His apartment in the Mishkenot Yisrael neighborhood was tiny and had few furnishings. All his neighbors and friends entreaties to improve his living conditions were rejected with determination. About this he once said: "Many times they tried to tell me that I should move from my apartment to a more spacious place, and I refused. Observe that after a long life, a man is taken from his apartment to the cemetery. So for me the adjustment will be easier, my room isn’t much bigger.”

"Reb Aryeh fulfilled the Talmudic law that "One must love his wife like himself, and honor and respect her more than himself." Once Rabbi Aryeh Levin’s wife felt pain in her foot. They went to the doctor together whereupon the doctor asked, "What can I do for you?" Rabbi Levin answered in all sincerity, "Doctor, my wife’s foot is hurting us!"

Reb Aryeh would generally not go to bed until two o'clock in the morning every night, because he would sit up at home helping to restore peace and harmony between married couples--- listening to their quarrels and arguments, and responding with his sage advice and solutions. When asked, "Why he did not arrange for couples to come to his house earlier when they need help?" He answered that "most couples with marital problems are worried about their reputations, so they all want to come here (discreetly) in the late hours of the night."

"In 1925, Rabbi Isser Zalman Meltzer was appointed to lead the Etz Chaim Yeshiva and Rabbi Aryeh Levin was made the Mashgiach (spiritual advisor). The yeshiva students loved Reb Aryeh. He never yelled at a child, but rather approached him and spoke to his heart so the student would become diligent in his studies. Thus, these children, who did not want to cause their beloved Rabbi any heartache, studied with diligence so that Reb Aryeh would be pleased with them.

Reb Aryeh behaved with love and affection to all his students, treating them as adults. One day he was seen going to a certain neighborhood and asking where a particular boy lived. This took people by surprise, but it was later learned that this boy had gone to see Reb Aryeh at noon on the same day to ask him something. Reb Aryeh was busy at the time, and he had asked the boy to wait for him. The boy waited a long time, but Reb Aryeh still did not come to see him, for he had forgotten about him. That night when Reb Aryeh arrived home, he remembered the boy and the fact that he had told him to wait. The boy was certainly disappointed to have not seen him, and Reb Aryeh could find no peace of mind for himself. “Who knows what sorrow the boy may have felt by my failure to see him?” he said. He gave himself no rest until he decided to go see the boy and hear what he had to say."
"An upper echelon administrator in one of the Israeli school systems streams, recounted his experience as a dormitory child in one of Jerusalem’s institutions many decades ago.

The food served in the institution was fairly meager and the young boy was always hungry. One day the institution served chocolate pudding and the boy took his portion and wolfed it down and then got back in line and asked for another portion. The server refused his request with a nasty remark. Frustrated and angered, the boy then turned over the entire chocolate pudding pot and spilled its contents on the ground.

The boy was beaten for the act and publicly reprimanded and humiliated by school officials. He was told that his eventual fate as to whether he would be expelled from the institution would be decided on the morrow by Reb Aryeh, the spiritual mentor of the institution.

At that moment, the educator said, I realized what it means to be a Torah Jew."

Reb Aryeh died six days after his 84th birthday. He and his wife Tzipporah are buried in the Sanhedria Cemetery in Jerusalem. Inscribed on his gravestone is the following instruction to visitors: "I ask anyone who comes to my grave to say: 'I firmly believe that there will be a Resurrection of the Dead when the time that the will arises from the Creator, blessed be His name.'"

May the merit of the tzadik Rabbi Aryeh Levin protect us all. Amen