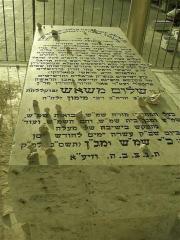 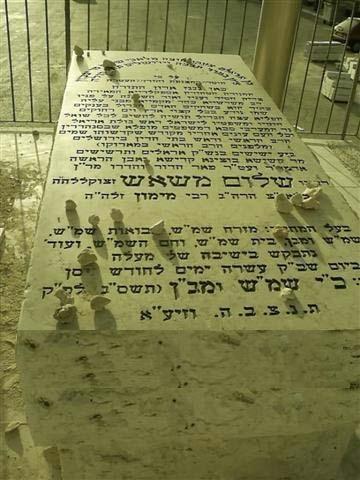 Sephardic Rav of Yerushalayim (1909-2003). Born the Moroccan city of Meknes, a city of Torah known as the Yerushalayim of Morocco. Rabbi Shalom learned under Rabbi Meir Toledano until the age of 14. His father then sent him to learn under the great sage Rabbi Yitzchak Sabag. Writing in his sefer, Tevu'as Shemesh, Rabbi Shalom declares, "The fact that I was able to grow in Torah may be credited to my father, who did not yield to the pressures and offers that I pursue lucrative positions in banks….Thus, all the credit for my Torah learning is his, too.” His other main mentor was his relative from both his paternal and maternal sides, Rav Yehoshua Birdugo, the raavad of Meknes. In 1960 with the petirah of the chief Rabbi and dayan of Casablanca, Rabbi Dovid Ibn Sussan, Rabbi Shalom became its raavad and chief rav, serving there for thirty years. In 1978, he moved to Eretz Yisrael to take the position as Chief Sepharic Rav of Yerushalayim. He was niftar on Shabbat Hagadol 5763 which is the Georgian Calendar year of 2003. - See more at: http://www.yeshshem.com/hilulanissan.htm#2

Rabbi Shalom Mashash, Jerusalem's chief Sephardi rabbi for 25 years, died  at the age of 90.
served for many years as the head of the rabbinical court in Casablanca. After retiring, he made aliah to Israel to serve as chief Jerusalem rabbi.

Mashash was among the few Sephardi rabbis who dared dispute Rabbi Ovadiah Yosef and staunchly defended the independent customs of Morocco's Jewry. He also supported publishing prayer books in their original Moroccan version. His death further reduces the meager halakhic opposition to Rabbi Yosef among the Sephardi Rabbinic deciders.

May the merit of the tzaddikRabbi Shalom Mashash protect us all, Amen.