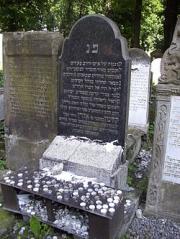 Rabbi Klonymos Kalman Halevi Epstein, better known as the Maor Vashemesh ("Light and Sun"), the title of his work, was the most celebrated of the students of Rabbi Elimelech of Lizhensk. He pays tribute to his mentor with the words, "The world was desolate until the two great luminaries appeared on the scene: the Baal Shem Tov and Rabbi Elimelech. They opened the gate to God for the righteous to enter."     His devotion to his master reached such proportions that he once prostrated himself on Rabbi Elimelech's grave and remained motionless there for hours in deep concentration.

The Maor Vashemesh was also a follower of the great chassidic sages Rabbi Yechiel Michel of Zlotchov, the Chozeh of Lublin, and Rabbi Menachem Mendel of Rymanov. The Chozeh of Lublin said that R' Klonymos is the reincarnation of the Tana Rabbi Eliezer ben Charsom, who was a Kohen Gadol (high priest) during the Second Temple.
While spending time with R' Elimelech of Lizhensk he merited to see Avraham Avinu (Abraham the Patriarch). For R' Elimelech it was a sign that the Maor Vashemesh should start leading a community. At 1785 The Maor Vashemesh started heading the Jewish community of Cracow, he was met with significant opposition, but even his opposers recognized his greatness and righteousness.

His work Maor Vashemesh was published by his son Rabbi Aharon Epstein; it offers profound chassidic insights interwoven with kabbalistic thoughts, arranged according to the weekly Torah portions. It is recognized as one of the most significant books on chassidic ideology and has gained universal acceptance.
The Maor Vashemesh was very proficient in the Zohar and encouraged everybody to study Mishnayot, Gemara and Zohar before praying.

After his death in 1827 he was succeeded by his son, Rabbi Aharon Epstein, who was also an eminent scholar.

Rabbi Klonymos Kalman: The essence of God's being is beyond human comprehension. However, God in His wisdom rigorously restricted His Divinity in order that man should be capable of gaining a very minute glimmer of understanding of the splendor of His Divine Light. God restricted Himself within ten "garments"-the ten sefirot, vessels through which the Light of the Creator is emanated to man. By virtue of this tzimtzum (Divine restriction), man can attain cognizance of God, ascending progressively to ever higher levels of understanding. He can achieve this by removing one restrictive "garment" after another until he reaches the stage of attaching himself to the Great Light of the Ein Sof, the Infinite.
God created the physical world after subjecting Himself to thousands of restrictions of His spirituality, enveloping Himself with numerous enclosures and barriers. He placed man in this physical world, and He rewards him for attempting to break through these barriers with all his might in order to come closer to Him and attach himself to Him. Thus, the greater the tzimtzum, the greater is man's reward for shattering the restrictive barriers by searching and probing the ultimate Truth of God until he has erased the final obstruction, and reaches the splendor of the Divine Light.  Indeed, this is the intent of the Mishnah (Avot 5:1), which states "With ten utterances the world was created...in order to bestow goodly reward upon the righteous who sustain the world that was created with ten utterances."
Although God created the world under the cover of ten "garments" and reach the nearness of God. By rising above the physical aspects of the mundane world and reaching out to the spiritual world, they earn a rich reward.


May the merit of the Tzaddik Rabbi Klonymos Kalman Halevi Epstein, protect us all, Amen.