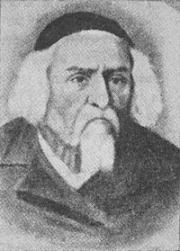 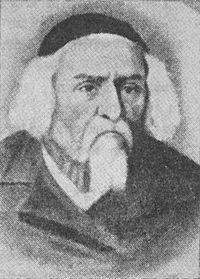 Rabbi Yosef Dov (Yoshe Ber) Solevetchik of Brisk, the Beis Halevi, father of Rabbi Chaim Solevetchik.Yosef Dov (1820-1892) was born in Nisvizh, near Minsk, to Rabbi Yitzchak Zev Soloveitchik. Rabbi Yitzchak Zev was a grandson through his mother of Rabbi Chaim of Volozhin. Although Rabbi Yitzchak Zev was not a Rabbi he was known as a baki in Shas and Shulchan Aruch. By the time Yosef Dov was ten he knew Mesechtas Bava Kama, Bava Metzia, Bava Basra, Brachos, Gittin and Kiddushin by heart and was already writing his own chiddushim. When he was 11 his father brought him to Volozhin to learn under his uncle, Rabbi Itzeleh, the Rosh Yeshiva and son of Rabbi Chaim of Volozhin. After his marriage, his father-in-law supported him for thirteen years. In 1849, Rabbi Itzeleh of Volozhin passed away. Less than four years later, his successor, Rabbi Eliezer Yitzchak Fried also passed away. The Rabbanim decided that two descendants of Rav Chaim of Volozhin, the Netziv and the Beis Haleivi, would lead the yeshiva. The Netziv would be Rosh Yeshiva and the Beis Haleivi would be assistant Rosh Yeshiva.The sefer Beis Haleivi is comprised primarily from the shiurim he gave in Volozhin. His derech halimud was something that was completely new and original to the Volozhiner Yeshiva and was very different from the traditional way that shiurim were given there. His sefer Beis Haleivi was published in 1863. In 1865, a delegation from the city of Slutzk came to the Beis Haleivi to present him with a ksav rabbanus that was signed by all of the respected members of the community and recommended by Rabbi Yitzchak Elchonon Spektor, the Kovno Rav. The Beis Haleivi served as Rabbi of Slutzk for close to ten years, but his unbending battle against the maskilim and the wealthy eventually forced him from the city. In 1865, a delegation from Brisk came to him and offered him the position of Rav to replace Rav Yehoshua Leib Diskin who had just moved to Eretz Yisrael. The Beis Haleivi served as Rav in Brisk for 17 years until his passing.

May the merit of the tzadik Rabbi Yosef Dov (Yoshe Ber) Solevetchik of Brisk protect us all. Amen