Grand Rabbi Yeshaya Steiner of Kerestir (1851 – Iyar 3, 1925), was the founder of the Kerestirer Hasidic dynasty 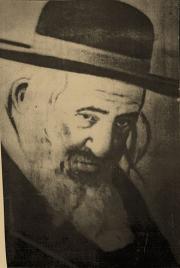 Grand Rabbi Yeshaya Steiner of Kerestir (1851 – Iyar 3, 1925), was the founder of the Kerestirer Hasidic dynasty.

He was born in 1851 in the town of Zboró, Hungary, today Zborov, Slovakia. When he was 3 years old, his father died. At the age of 12, his mother sent him to study in Hungary by Rabbi Tzvi Hirsh of Liska the author of Ach Pri Tevua. When he died and his son-in-law Rabbi Chaim Friedlander author of Tal Chaim succeeded him, Yeshaya started travelling to Rabbi Chaim Halberstam of Sanz. After the death of Rabbi Chaim of Sanz, he became a disciple of Rabbi Mordechai of Nadvorna. The Nadvorner Rebbe suggested that he move to the town of Kerestir, in Hungary,

In Kerestir he became a Hasidic Rebbe and became known as a miracle worker.[1] In 1925 he was succeeded by his son Avraham.

Reb Yeshaya had two residences one at 65 Kossuth Ut. and one that he used when he would seek seclusion or if there was an overabundance of guests he would go to his other house on 3 sipos koz.

May the merit of the tzadik Rabbi Yeshaya Steiner of Kerestir protect us all . Amen