Rabbi Tzvi Hirsch was born on Sivan 4, 5555 (1795) in the town of Lissa, Germany, in the province of Posen. In his youth he studied Torah with great Gaonim, Rabbi Yaakov of Lissa (author of Chavot Da’at), and Rabbi Akiva Eiger of Posen. He was noted for his extraordinary gifts and incredible diligence in study. 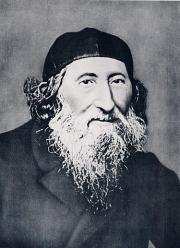 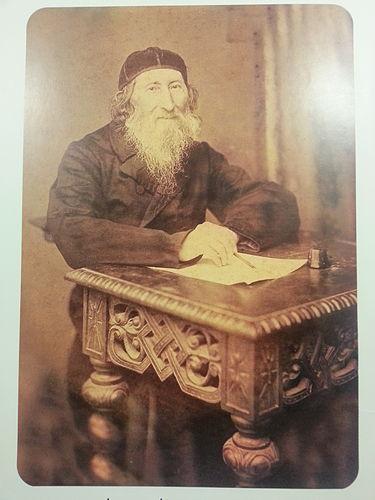 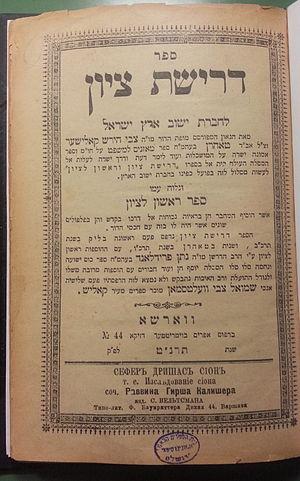 In every era, there have been great rabbis who have placed Jerusalem at the height of their concerns. They always dreamed of returning to Zion, yearning for the day when they would be able to settle in Eretz Israel and live there. One of these was Rabbi Tzvi Hirsch Kalischer, who already over 150 years ago worked with all his might to have the land settled and rebuilt.

The son of Rabbi Shlomo Kalischer, Rabbi Tzvi Hirsch was born on Sivan 4, 5555 (1795) in the town of Lissa, Germany, in the province of Posen. In his youth he studied Torah with great Gaonim, Rabbi Yaakov of Lissa (author of Chavot Da’at), and Rabbi Akiva Eiger of Posen. He was noted for his extraordinary gifts and incredible diligence in study.

He once fell and injured his head when he was young, causing his family great distress. Someone rushed to get the doctor, and his father and mother wept over what had happened to him. The young Tzvi Hirsch said to them with a smile, “Why are you so down? From now on I can hope to become great in Torah, for my head is open.” Before long, Rabbi Tzvi Hirsch was among the greatest of those who studied Torah. Many communities asked him to come and be their Rav, but Rabbi Tzvi did not want to use the Torah for material ends.

After his marriage, he settled in his wife’s hometown of Thorn (now Torun, Poland). There he started a small business, which his wife ran while he studied Torah day and night. The Jewish community of Thorn immediately recognized the greatness of this young avrech, asking him to become the Rav of the city. He agreed, occupying this position for the rest of his life (some 40 years) without a salary. On his desk he simply had a box labeled, “For settling in Eretz Israel,” and whoever wanted to leave a donation could do so. His house was wide open, and from far and near people came in search of his help. He had a good heart, and he nourished the poor and married off orphans with his own money. People also came seeking his advice, and he concerned himself with the needs of the local community, being involved with everything that occurred in Thorn.

Rabbi Tzvi Hirsch Kalischer devoted his entire life to Torah and wisdom, to Tzeddakah and generosity. Since he lived near the border, Jewish refugees from Poland and Russia came to him, and he helped them as much as he could to go where they wanted.

In 5603 (1843) he published his first book, Even Bochen, a commentary on the Shulchan Aruch, Choshen Mishpat chapter 89, as a sample of his book Moznayim LaMishpat U’Mishnah Acharonah. However a dozen years passed before he could publish his great work Moznayim LaMishpat, which is composed of vast commentaries on each Halachah, as well as Halachic decisions on all of Choshen Mishpat. This book made his name famous in Germany, and many of the greatest rabbis began to address their questions to him concerning Torah and Halachah.

Rabbi Tzvi Hirsch Kalischer did not enclose himself in the field of Halachah. He was also very much occupied by Scripture and Hebrew grammar, and he was interested with medieval as well as current Jewish philosophy. The same year in which he published Even Bochen, he also produced the book Emunah Yesharah in two parts, and later on he wrote a commentary on the five books of the Torah. Besides these important works, Rabbi Tzvi wrote the following: A commentary on the Aggadah entitled Yetziat Mitzraim (“The Exodus from Egypt”); glosses on the Shulchan Aruch, Yore Deah, that were printed in the Widow and Brothers Romm Vilna edition of the same under the title Tzvi LaTzaddik; and notes on the mishnayot (tractates Nashim and Nezikim) that were printed in the Romm edition of the same.

Rabbi Tzvi Hirsch greatly loved Eretz Israel, and he devoted his life to it. He wrote extensively on the mitzvah of living in Eretz Israel, and he also corresponded with the greats of his generation on the construction of the Temple and the possibility of erecting an altar to offer sacrifices.

In his work Derishat Tzion, he developed a plan that aimed at repurchasing the land from foreigners and settling Jewish farmers there. Among other things, he stated: “When we redeem the land, we make a pathway for our G-d and a way towards the Final Redemption.”

In the beginning of the year 5623 (1862), Rabbi Tzvi Hirsch had the opportunity to travel to Koenigsberg with many of the rabbis of Russia, and he there he explained his plan to them. The Gaon Rabbi Israel of Salant, who was present at the gathering, promised that when he returned to Kovno he would see that “Jewish owners who rented out their property would give one percent of the rent for working the fields in Eretz Israel, and tenants would give the same.”

Rabbi Tzvi Hirsch also influenced the most generous in the Jewish community, such as R. Moses Montefiore and R. Amschel Rothschild, to support the Eretz Noshavet foundation that he established. And how great was his joy when he learned that Montefiore, during his fourth trip to Eretz Israel, had purchased a plot of land near Jaffa and planted an orchard there. This was the first Jewish orchard in the Holy Land’s new settlement.

In his later years, Rabbi Tzvi Hirsch decided to travel to Eretz Israel, the love of his life. However his family, which feared for the fragile health of an aged father who was already 76 years old, begged him to refrain. He therefore asked for the advice of the Tzaddik Rabbi Avraham of Chernov, who told him not to go to Eretz Israel because a person such as himself could more efficiently work for the good of the Holy Land, as well as for the poor, by staying here. He therefore remained in his city and continued his work in support of settling in Eretz Israel.

Rabbi Tzvi Hirsch Kalischer passed away at the age of 80 on Heshvan 5, 5635 (1874) in Thorn, where he was buried with great honor. With the little money that was found in the deposit box of the Eretz Noshavet foundation after his death, a plot was later purchased for him near the tomb of the Matriarch Rachel.

may the merit of the Tzadik Rabbi Tzvi Hirsch Kalischer protect us all. Amen