Rabbi Yehuda Meir Shapiro  was a prominent Polish Hasidic rabbi and rosh yeshiva, also known as the Lubliner Rav. Shapiro was considered a gaon (Torah genius) in his lifetime. He studied Torah extensively and was a great scholar even by the high standards of the era he lived in. 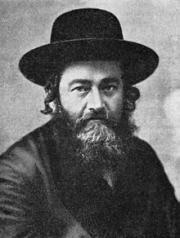 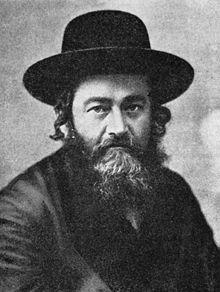 Yehuda Meir Shapiro (or Shapira) (March 3, 1887 – October 27, 1933), was a prominent Polish Hasidic rabbi and rosh yeshiva, also known as the Lubliner Rav. He is noted for his promotion of the Daf Yomi study program in 1923, and establishing the Chachmei Lublin Yeshiva in 1930.

In the years 1922-1927 Shapiro was the first Orthodox Jew to become a member in the Sejm (Parliament) of the Second Polish Republic representing the Jewish minority of the country.

Yehuda Meir Shapiro was born in the city of Suczawa (Shatz), Bucovina, then Austrian-Hungarian Empire, now in Romania,in 1887. He was a descendant of Rabbi Pinchas Shapiro of Korets, one of the students of the Baal Shem Tov, and from his maternal side, of Rabbi Joseph ben Isaac Bekhor Shor, a French tosafist. After cheder, Shapiro began to study with his grandfather, the Baal Minchas Shai (Rabbi Shmuel Yitzhak Schor). Another of his early teachers was Rabbi Shulem Moshkovitz (popularly known as the Shotzer Rebbe. He was also a well known kabbalist).

Shapiro began to get a reputation, and became known as the Illui of Shatz. From an early age, he was known as an outstanding leader and gifted speaker. He was soon ordained by many great scholars, including the Maharsham. His grandfather introduced him to the Chortkover Rebbe, and thus began his passion for Hasidism, and the beginning of his relationship with the Chortkover Rebbe.

His first rabbinical posting came in 1911 when he was appointed Rav of Galina. He spent ten years in the city, during which time he established a yeshiva called Bnei Torah. Construction commenced in 1920. The yeshiva held a Talmud Torah, a place to train rabbis, and a kitchen to feed orphaned children. It ran at a budget of over half a million marks. This yeshiva served as a prototype for what was later to become Chachmei Lublin.

After leaving Galina, Shapiro began serving as Rav of Sanok in 1920.

In 1924, Rabbi Meir accepted his third rabbinical position in Petrakov/Piotrkow.

On 14 June 1931, he was appointed Rav of Lublin in the old synagogue of the Maharshal.

Shapiro introduced the revolutionary idea of Daf Yomi (Hebrew: דף יומי‎‎, "page [of the] day" or "daily folio"), a daily regimen undertaken to study the Babylonian Talmud one folio (a daf consists of both sides of the page) each day. Under this regimen, the entire Talmud is completed, one day at a time, in a cycle of seven and a half years. Rabbi Shapiro introduced his idea at the First World Congress of the World Agudath Israel in Vienna on 16 August 1923. The first cycle of Daf Yomi commenced on the first day of Rosh Hashanah 5684 (11 September 1923). Now in its 13th cycle,Daf Yomi has been taken up by tens of thousands of Jews worldwide.

Yeshivas Chachmei Lublin was, along with Daf Yomi, Shapiro's greatest achievement. He conceived of a yeshiva for Hasidic Poland, modeled on Lithuanian yeshivas such as Volozhin, Slabodka and Novardok, but which would train Hasidic rabbis as the next generation to lead Polish Jewry. The Yeshiva was housed in a massive building, housed hundreds of students, and had a vast library of over 100,000 books.

In 1932 Shapiro was approached by leaders of the Jewish Community of Łódź, who wanted to offer him the position of Chief Rabbi of Łódź. Many people wanted to appoint Rabbi Mendel Alter of Kalish, (b. 1877, Ger) the brother to the Gerrer Rebbe (and youngest son of the Sfas Emes) to this position. Rabbi Shapiro negotiated that a large part of his wage would go to pay off the debts that Chachmei Lublin was still struggling to pay off. Eventually it was decided to give it to Rabbi Shapiro. After all the protracted negotiation that went on to get Rabbi Shapiro into this position, he died three days after being appointed Chief Rabbi.

Whilst serving in Galina, Rabbi Shapiro began his involvement with Agudat Israel. He was present at its founding conference in 1912. In 1914 he was appointed head of the Education Department of Agudas Yisrael in East Galicia, becoming president in 1922 of Agudas Yisrael in Poland. He played a role in the conference in the city of Lvov, which had the purpose of launching the Aguda in Galacia, some two years after its founding in Katovitz in 5672.

At the time, he was also added as a member to the Moetzes Gedolei HaTorah. Rabbi Shapiro was initially very doubtful as to whether he should become an MP for the party, but was encouraged to do so by his rebbe, the Chortkover.

Rabbi Shapiro, together with Aron Levine and Zalmen Sirtzokin, chaired the committee which as a part of the Polish Ministry for Religious Affairs, held responsibility for delegating Rabbinical positions throughout Poland. He was also part of the Vaad HaChinuch.

Beginning in 1922, Rabbi Shapiro served as a parliamentarian to the Polish Sejm. In 1928 he stepped down as a politician so that he could devote all his energies to Chachmei Lublin Yeshiva.

Shapiro became ill with typhus in 1933 and died within the month, on 27 October 1933 (7 Cheshvan 5694)] at the age of 46. His death was mourned in both Jewish and non-Jewish Poland. Countless newspapers across the entire political spectrum, from Orthodox to Yiddishist to socialist, featured front-page biographies of Rabbi Shapiro.

Shapiro's remains were reinterred in Israel in 1958, under the auspices of his brother. He was reburied in Har HaMenuchot with a full ceremony. Rabbi Yitzchok Meir Levin delivered a eulogy, as did those students of his who had survived the Holocaust.

Shapiro is widely revered throughout the Jewish world as the founder of Daf Yomi. The neighborhood of Zikhron Meir in Bnei Brak was established in his memory by Yaakov Halperin; this is the neighborhood that hosts many of the major yeshivas in Bnei Brak.

Shapiro was considered a gaon (Torah genius) in his lifetime. He studied Torah extensively and was a great scholar even by the high standards of the era he lived in. His two major works are Ohr HaMeir and Imrei Da'as.