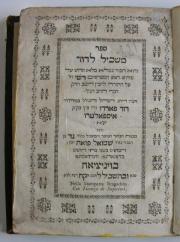 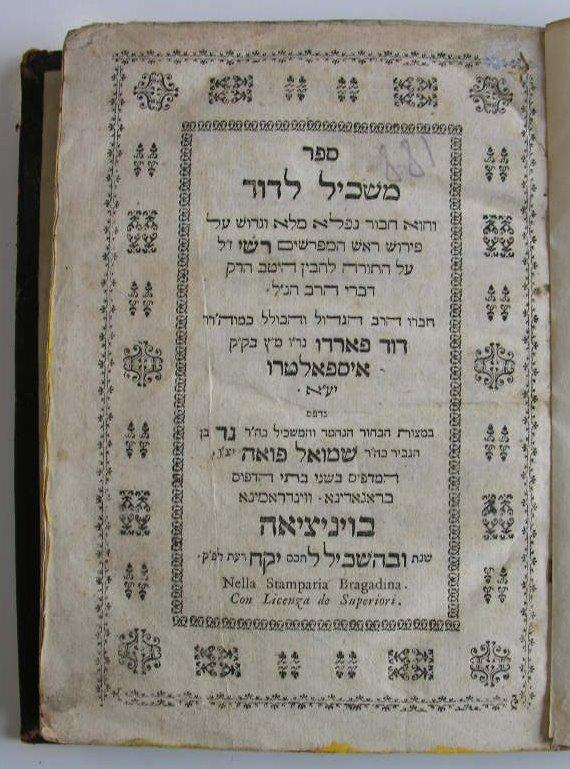 R. David Samuel ben Jacob Pardo, a famed Italian rabbinical author and poet, was born in Venice. He went to Sarajevo for a time as a result of a dispute over an inheritance, and from there to Spalato, in Dalmatia. From approximately 1738 he was a teacher of children, at the same time studying under the local rabbi, R. Abraham David Papo. Eventually R. Pardo was appointed rabbi of the town. From 1760 he was rabbi of Sarajevo. From 1776 to 1782 he traveled to Ereẓ Israel, settling in Jerusalem where he served as head of the yeshivah Ḥesed le-Avraham u-Vinyan Shelomo. Pardo was regarded as one of Jerusalem's great rabbis. Of his many works his series of commentaries and novellae on tannaitic literature are especially original. His first work was Shoshannim le-David (Venice, 1752), a commentary on the Mishnah. The somewhat sharp language he employed in the first part in criticizing contemporary scholars gave rise to friction between him and David Corinaldi and Mas'ud Rokeaḥ in Leghorn. But after he mitigated his language in the second part and published an apology, a reconciliation took place. R. Pardo's Ḥasdei David (Leghorn, 1776–90; Jerusalem, 1890) on the Tosefta is considered the most important commentary on this work (the portion on Tohorot, the manuscript of which is in the National Library of Jerusalem, has not been published). He completed the work in Jerusalem on his 68th birthday. Portions of it were published in the Romm Vilna edition of the Talmud with the text of the Tosefta. Similarly, his Sifrei de-Vei Rav (Salonika, 1799), which he commenced in 1786 and was published by his son Abraham after his death, is the most important commentary on the Sifrei. In it he makes use of commentaries of R. Hillel b. Eliakim, R. Solomon ibn Okhana, and R. Eliezer ibn Nahum, all of which he had in manuscript. Other works he wrote are Mikhtam le-David (Salonika, 1772), halakhic decisions and responsa; Maskil le-David (Venice, 1761), a supercommentary on Rashi's biblical commentary; La-Menaẓẓe'aḥ le-David (Salonika, 1765), on those talmudic passages where alternative explanations are given; and Mizmor le-David (Leghorn, 1818), notes on the Perot Ginnosar of Hezekiah da Silva and Ḥayyim ibn Attar on Shulḥan Arukh, Even ha-Ezer. Pardo's liturgical poems and prayers are included in the Sephardi daily and festival prayer books. His arrangement of the Avodah for the Day of Atonement, which was adopted in the Sephardi rite, appeared in his Shifat Revivim (Leghorn, 1788).

Of his sons, R. Jacob Pardo became chief rabbi of Ragusa and died in Jerusalem. He was a noted talmudist and well versed in Kabbalah. His chief works were Kohelet Ya'akov (Venice, 1784), a commentary on the early prophets; Appe Zutre (ibid., 1797), on Hilkhot Ishut of the Shulḥan Arukh Even ha-Ezer; and Minḥat Aharon (ibid., 1809), which deals mainly with the laws of prayer. A second son, Isaac, was rabbi of Sarajevo, while a third, Abraham, who married the daughter of R. Ḥ.J.D. Azulai , became head of the yeshivah Ḥesed le-Avraham u-Vinyan Shelomo after his father-in-law's death.R. Pardo's disciples included Shabbetai b. Abraham Ventura, who succeeded him as rabbi of Spalato, R. David Pinto, and R. Abraham Penso.