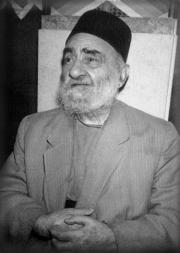 Yaakov Mutzafi (Hebrew:יעקב מוצפי Ya'aqov Muṣafi; 1899 - May 25, 1983) was the Av Beth Din of the Sephardi Edah HaHaredith, a Kabbalist, and the anti-Zionist rabbi of Shemesh Sedaqah Synagogue in Jerusalem, Israel. He was the last spiritual leader of the ancient Jewish community of Iraq, which was airlifted to Israel in 1952.

Yaakov Mutzafi was born in Baghdad, Ottoman Iraq, the son of Ezra Mutzafi and Mazal Tov. He received an early Torah education from his grandfather, Rabbi Moshe Mutzafi, and his primary education at Midrash Talmud Torah alongside his life-long friend and colleague Silman Mutzafi. For his secondary education, Mutzafi was enrolled at Midrash Bet Zilkha, where he received instruction from Ephraim HaCohen, Shimon Agassi, and Sadqa Hussein, the latter with whom Mutzafi would share a lifetime of collaboration. He was later to be the student of Yehuda Fatiyah.

Mutzafi married the daughter of Rabbi Sasson Dangour, founder of Yeshivath Dorshei Torah, where he would subsequently continue his studies alongside Silman Hugi Aboudi.

The winds of war that were blowing in Europe in the late 1930s were about to leave their marks on the faraway Kingdom of Iraq. The British-backed monarchy was coming under increased pressure from pro-German Arab nationalists who were constantly agitating against the royal government, with Jews and other minorities caught in the middle.

The building political pressure boiled over into a bloody pogrom against the Jews in Baghdad on June 1–2, 1941, which became known as the farhud. Over 180 Jews were killed, with many more injured in the violence. Mutzafi raced to open up the gates of Midrash Bet Zilkha to the surviving Jews who were evicted from their homes, and arranged for their upkeep via donations received from philanthropists in the community.

With the tumultuous years of World War II over, the final chapter of the History of the Jews in Iraq was about to be written. With the founding of the new State of Israel, Jewish life in the Arab world was becoming more precarious by the day. Ever the pragmatist, Mutzafi understood that the wheels of history were turning fast, but without a favorable outcome for the community he so adored. Although he spent countless hours tending to the spiritual needs of a downtrodden people, he reasoned that there would be no viable future for the Jews in Iraq. He had previously spent one month visiting with his former teacher Sadqa Hussein in Jerusalem, and in 1950 he finally moved there. He immediately took up scholarly residence at Shemesh Sedaqah Synagogue, where he was to serve as hazzan and Rosh yeshiva, at first under the wing of his master. Upon the latter's death in 1961, Mutzafi inherited the full mantle of spiritual leadership of the transplanted community in Israel. Mutzafi would be seen in flowing jellabiya and fez giving council and administering blessings to Jews of various persuasions in the Beit Yisrael neighborhood.

Mutzafi served as Av Beth Din of the Sephardi Edah HaHaredith, an organization more closely associated with the anti-Zionist rabbis of the Ashkenazi Old yishuv. Mutzafi shared the same beliefs as his fellows in the Edah regarding their disassociation from the Israeli government, most notably regarding the ban on taking part in elections to the Knesset, even encouraging participation in Neturei Karta demonstrations.

Yaakov Mutzafi died in 1983, at the age of 83. He was buried at the Mount of Olives Jewish Cemetery.

Mutzafi was a mentor to Chief Rabbi of Israel Mordechai Eliyahu. The Jerusalem Municipality named a street in the Ramat Shlomo neighborhood in East Jerusalem after Mutzafi,as did the city of Beitar Illit.

May the merit of the Rabbi, Protect us all. Amen