A student of The Maggid of Mezritch. Head rabbi of Frankfurt-on-the-Main (Germany) from 1772 to 1805. 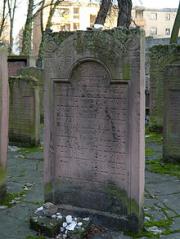 Rabbi Pinchas Horowitz, together with his younger brother, the future Rabbi Shmuel Shmelke of Nikolsburg, studied under their father, Rabbi Tzvi Hirsh of Chortkov. Early in life they joined the chassidic movement , becoming dedicated followers of the Maggid of Mezritch.
As a young man R' Pinchas served as rabbi in Vitkova and Lechovitz, and in 1772 he received the appointment to serve as rabbi of the prestigious community of Frankfurt-on-the-Main and as dean of its yeshivah. He served as the rabbi of Frankfurt for 33 years, until his death. His gracious and kindhearted character gained him the instant affection of the entire community. The gentile population too admired the new rabbi for the compassion and benevolence he displayed toward the needy of all creeds.
Taking an active part in public affairs, he spoke out forcefully against the German translation of the Bible, by Moses Mendelssohn, with its commentary called Buir. Mendelssohn wrote this translation as a means of introducing Jews to the German language and culture. It proved to be the first step on the road to integration and assimilation, and the forerunner to intermarriage and conversion.

Rabbi Pinchas's greatest achievement was his work as a posek, or leading halachic authority. The most complex halachic queries from far and wide were addressed to him, and were published in the collection of responsa entitled Teshuvot Givat Pinchas. His prodigious greatness in Torah is evident in his work Haflaah, which consists of talmudic and halachic novellae. His commentary on the Torah, Panim Yafot, is written in the spirit of Chassidism and reflects the influence of his mentor, the Maggid of Mezritch. His son, Rabbi Tzvi Horowitz, succeeded him as Rabbi of Frankfurt.

R' Shmelke and R' Pinchas Horowitz first came to the Maggid on Erev Shabbat.
Although they expected a lengthy discussion with him, the Maggid dismissed them after a few words. they had hoped to hear impressive Torah at his table, and were deeply disappointed when they felt nothing from his words, which - unbeknownst to them - contained deep secrets of Torah. Like the Maggid upon meeting the Baal Shem Tov, they decided to go home. Aware of their intention, R' Zusha (a student of the Maggid) cautioned, "We have learned, 'if a rabbi is like an angel of God, seek Torah from his mouth' [Chagigah 15b]. Has any of us ever seen an angel? Nevertheless, if one came your way, you wouldn't question him, test him, or seek a sign from him. So it is with a true Tzaddik: from him you should seek Torah! "With these words, the brothers returned to the Maggid and asked him to teach them the revealed part of Torah. The Maggid then posed a very difficult question about a Gemara and offered an answer so simple and straightforward that they were amazed they hadn't arrived at it themselves. This was followed by a strong refutation, and another solution. After nine such exercises, the Maggid closed the Gemara and asked, "Why have you traveled here? Do great ones like yourselves need the likes of me?" He then referred to their ascetic lifestyle, which he knew through ruach hakodesh: "One who prays and ascends into the upper spheres but remarks at the end of the day, 'You know, today I was not so bad!' - his Divine service is cast out of Heaven. "When they heard this, R' Pinchas and R' Shmelke said, "You ask why we traveled to see you. We would have walked even a thousand miles to hear such words!"

[At the time of Creation, the sparks from the Divine Light fell to earth in a primordial cataclysm called shevirat HaKeilim, the breaking of the vessels. The sparks of holiness-nitzotzot hakedoshim scattered and were mixed with the dross of earthly existence. It is Israel's specific task to correct the primal flaw by freeing the entrapped sparks. This can be done through the proper observance of the Torah. When all the sparks are released, Mashiach will come.]
R' Pinchas Horowitz comments in these words:
The purpose of all the exiles of the Jewish people to the four corners of the earth is to release the sparks of holiness that are imprisoned in those places. When the children of Israel left Egypt it was a complete redemption, for not even one holy spark was left in that country, as it is written, "The Israelites drained Egypt"(Exodus 12:35)...The ultimate redemption of Israel from the exile will not arrive until the coming of Mashiach. Then all the nitzotzot hakedoshim that are scattered throughout the world will have been released, just as it happened in Egypt.      (Panim Yafot, Yitro)

May the merit of the tzaddik Rabbi Pinchas Halevi Horowitz protect us all, Amen.

Special prayers to connect to this Tzadik