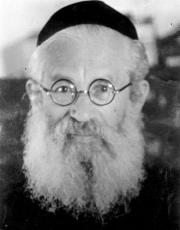 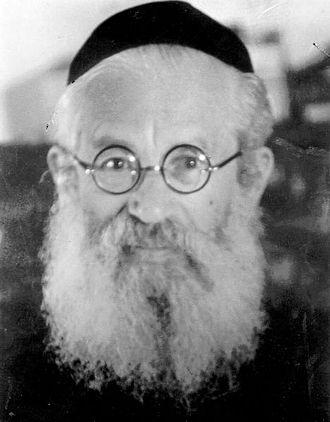 Isaac Halevi Herzog was born in Łomża, Poland, the son of Liba Miriam (Cyrowicz) and Joel Leib Herzog. He moved to the United Kingdom with his family in 1898, where they settled in Leeds. His initial schooling was largely at the instruction of his father who was a rabbi in Leeds and then later in Paris.

After mastering Talmudic studies at a young age, Yitzhak went on to attend the Sorbonne and then later the University of London, where he received his doctorate. His thesis, which made him famous in the Jewish world, concerned his claim of re-discovering Tekhelet, the type of blue dye once used for the making of Tzitzit.

Rabbi Herzog's descendants have continued to be active in Israel's political life. His son Chaim Herzog was a general in the Israel Defense Forces and later became ambassador of Israel to the UN and President of Israel. His son Yaakov Herzog served as Israel's ambassador to Canada and later as Director General of the Prime Minister's Office. He also accepted an offer to become Chief Rabbi of the British Commonwealth but due to ill health never took up that role. His grandson Isaac Herzog is a member of the Knesset, Israel's parliament, and head of the Opposition. He previously served as housing and tourism minister and minister of welfare.

Rabbi Herzog served as rabbi of Belfast from 1916 to 1919 and was appointed rabbi of Dublin in 1919. A fluent speaker of the Irish language, he supported the First Dáil and the Irish republican cause during the Irish War of Independence, and became known as "the Sinn Féin Rabbi". He went on to serve as Chief Rabbi of Ireland between 1922 and 1936, when he immigrated to Palestine to succeed Rabbi Abraham Isaac Kook as Ashkenazi Chief Rabbi upon his death.

In May 1939, shortly before the Second World War, the British put out the White Paper of 1939 restricting Jewish immigration to Palestine. After leading a procession through the streets of Jerusalem, with an unusually united Jewish following from all sects, on the steps of the Hurva Synagogue he turned and said: "We cannot agree to the White Paper. Just as the prophets did before me, I hereby rip it in two." Some 40 years later, on 10 November 1975 Ambassador Herzog repeated his father's gesture with the UN resolution that Zionism is equal to racism.

During the Second World War, Rabbi Herzog travelled with great risk to the US, and back, not before he was able to secure a meeting with Roosevelt. Roosevelt smiled and did not reply to the Rabbi's pleadings for a promise to help the Jews of Europe. His biographer records that several people noticed that his hair turned white when he left the meeting, which he perceived as a failure. Following this, he immediately returned home, missing the ride on a ship that was sunk by a U-boat, and taking what was said to be the last civilian ship to cross the Atlantic during the war.

After the war, Rabbi Herzog dedicated himself to saving Jewish children especially babies and bringing them back from their places of hiding throughout all of Europe, to their families or to Jewish orphanages. Many of these were hidden in Christian monasteries or by Christian families, and refused to return them. In his biography, he tells of the difficulties he had of meeting the Pope who avoided him, but did receive in the end assistance from the Vatican. In later years it was found that Karol Wojtyła, future Pope John Paul II, was the contact who helped the rabbi out.However, defenders of Pope Pius XII have asserted that Herzog had maintained friendly relations with the pontiff during and after the World War II. In 1945, he stated: “The people of Israel will never forget what His Holiness and his illustrious delegates are doing for our unfortunate brothers and sisters in the most tragic hour of our history, which is living proof of Divine Providence in this world.”

May the merit of the Tzadik  Rabbi Yitzhak HaLevi Herzog protect us all. Amen