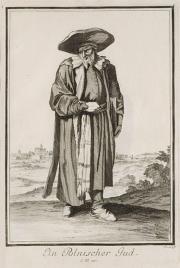 Nathan (Nata) ben Moses Hannover (Hebrew: נתן נטע הנובר) was a Ruthenian Jewish historian, Talmudist, and kabbalist; he died, according to Leopold Zunz (Kalender, 5623, p. 18), at Ungarisch-Brod, Moravia, on 14 July 1663. Jacob Aboab, however, in a letter to Unger (Wolf, Bibl. Hebr. iii., No. 1728), gives Pieve di Sacco, Italy, as the place of Hannover's death, without indicating the date. The place of his birth is equally uncertain. According to Graziadio Nepi-Mordecai Ghirondi, (Toledot Gedole Yisrael, p. 270) he was born at Cracow, but Steinschneider says that Nathan Hannover and Nathan of Cracow were two different persons.

Hannover lived for a time at Zaslav, Volhynia, and when this town was attacked by the Cossacks he fled from Poland. He went first to Prague, then to Venice, where he studied Cabala under Hayyim Cohen, Moses Zacuto, and Samuel Aboab. Later he became rabbi of Iaşi, Moldavia, and afterward, according to Jacob Aboab, he returned to Italy.

Hannover is chiefly known for his work entitled Yeven Mezulah (Venice, 1653), describes the course of the Khmelnytsky Uprising in the Polish–Lithuanian Commonwealth from a Jewish perspective. Hannover in this work gives a brief description of the Polish government of the time and of the relations between the Poles, Jews and Cossacks, and the causes which led to the uprising. He also gives a very vivid picture of Jewish life in Poland and the yeshivot.

This work, owing to its literary value, was translated into Yiddish (1687), into German (1720), and into French by Daniel Levy (published by Benjamin II., Tlemçen, 1855). This last translation was revised by the historian J. Lelewel, and served as a basis for Meyer Kayserling's German translation (also published by Benjamin II., Hanover, 1863). Kostomarov, utilizing Salomon Mandelkern's Russian translation, gives many extracts from it in his Bogdan Chmielnicki (iii. 283-306).

Yeven Mezulah came under criticism in the late 20th century, due to its severe overstating of casualties during the Bogdan Chmielnicki rebellion in 1648 and 1649, and it is no longer considered a reliable historical source in spite of its literary qualities. Yeven Mezulah was criticized in particular by Shaul Stampfer, Edward Fram, Paul Robert Magocsi's "Ukraine: A History", and the Petro Mirchuk.

May the merit of the tzadik protect us all. Amen