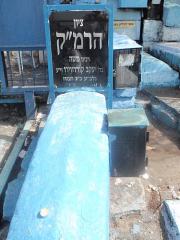 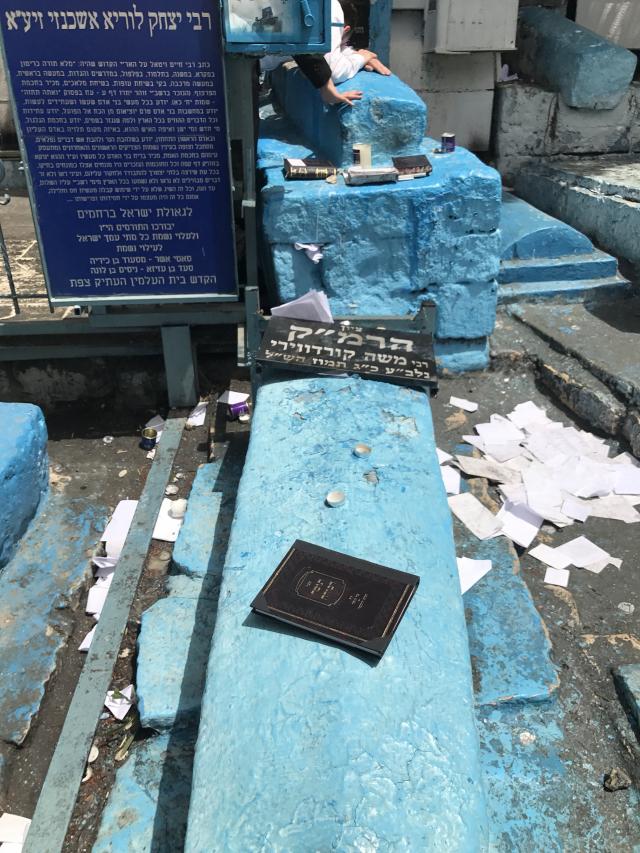 Kabbalist, known by the name the RAMAK, the initials of Rabbi Moshe Cordovero.

One of the greatest of all Kabbalists was Rabbi Moshe Cordevero. His birthplace is unknown, but the name Cordovero indicates that his family originated in Cordova and fled Spain during the expulsion of 1492. The Ramak lived in Tzefat, the city that was soon to become famed as a center of  Kabbalah. At a young age, he already gained a reputation as an extraordinary genius.  Besides his knowledge in Kabbalah, he was a Talmudic scholar and philosopher of the highest rank, and was widely respected in these fields.  He was even one of the four to receive the special semicha - ordination from Rabbi Yaakov Beirav in 1538, along with Rabbi Yosef Karo (Cordovero's teacher in Jewish Law), Rabbi Moshe of Trani and Rabbi Yosef Sagis, all of whom were much older and better known than the young prodigy.

In 1542, at the age of twenty, the Ramak heard a heavenly voice urging him to study Kabbalah with his brother-in-law, Rabbi Shlomo Alkabetz, composer of "Lecha Dodi". He was thus initiated into the mysteries of the holy Zohar, of Rabbi Shimon bar Yochai. The young Ramak mastered the text completely. This failed to satisfy him, however, since its teachings are often vague, without discernible structure. In order to clarify them in his own mind, he began writing two books. The first was Ohr Yakar ("The Precious Light"), a voluminous 16 volume commentary on the Zohar. The second, Pardes Rimonim ("Orchard of Pomegranates"), completed in 1548, secured his immortal reputation. The Pardes, as it is known, was a systemization of all Kabbalistic thought up to that time. Especially important was that in it the author reconciled many early schools with the Zohar's teachings, demonstrating the essential unity and self-consistent philosophical basis of Kabbalah.

Three other books for which the Ramak is known are Tomer Devorah ("The Palm Tree of Deborah"), in which he utilizes the Kabbalistic concepts of the Sephirot (Divine attributes) to illuminate a system of morals and ethics,  Ohr Ne'erav, a justification of and insistence upon the importance of Kabbalah study, and an introduction to its methods, and Elimah Rabbati is a treatise on kabbalistic problems.

Around 1550, the Ramak founded a Kabbalah academy in Tzefat (Safed), which he led for 20 or so years, until his death. It is reported that the prophet Elijah revealed himself to him. Among his disciples were many of the luminaries of Tzefat, including Rabbi Eliyahu di Vidas, author of Reshit Chochmah (Beginning of Wisdom), and Rabbi Chaim Vital, who later became the official recorder and disseminator of the teachings of the holy Ari, Rabbi Yitzchak Luria.

This group of mystics adhered to methods found in the Zohar, and engaged in various acts of penance, in order to bring about the Redemption. They would spend long hours in the fields meditating and praying, and they would visit the nearby ancient graves of different scholars of the Mishnah. When the Ari arrived in Tzefat, he joined this group of kabbalists, behaving with the utmost modesty, hoping to conceal his greatness. Only the Ramak with his pure vision realized who he was.

Before his passing in 1570, the Ramak said: "I shall soon leave this earth.  Yet after my death, someone will replace me. And even though many of that person's statements may seem to contradict mine, do not oppose him and do not argue with him, for they stem from the same source as do mine and are absolutely true.  His soul is a spark of Rabbi Shimon bar Yochai, and whoever opposes him opposes the Shechinah–the Divine Presence."

"What is his name?" the disciples queried. "I cannot tell you. At this point, he doesn't want his identity made known. This, though, I can say: He who sees the cloud which at my funeral will precede my coffin, will be my successor."

A few weeks later, on the 23rd day of the month of Tammuz, Rabbi Moshe Cordevero passed away. Stunned by the news of this great loss, the entire community mourned. At his funeral, which was attended by all of Tzefat's Jews, many eulogies were recited. Among the eulogizers was the Ari,  who described the Ramak as totally free of sin.

As the throng accompanied the Ramak on his last earthly journey, all wept bitterly. When the bearers of the coffin reached the cemetery, they continued walking a long while, until reaching a certain site.  Then, turning to the following crowd, they said: "We shall bury him here, beside one of Israel's greatest sages". However, the Ari stopped them, crying out: "Don't bury him here.  The cloud which is preceding his coffin has continued on its path. Surely it will indicate where the Ramak desires to be buried." Hearing these words, all were stunned. Now they knew the identity of their new leader.

That very day, the Ari's fame began to spread, and scores of great scholars began clustering around him.  And, as predicted by the Ramak, although the Ari's teachings seemed to contradict those of his predecessor, eventually all realized that the views of the two really concurred.

May the merit of the tzaddik Rabbi Moshe Cordovero protect us all, Amen.