Rabbi Yeruchem Halevi Levovitz (Hebrew: ירוחם ליבוביץ‎‎; ca. 1873-1936), also known by his hundreds of students simply as The Mashgiach, was a famous mashgiach ruchani and baal mussar (Jewish Ethics) at the Mir yeshiva in Poland. 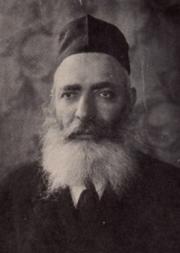 Rabbi Yeruchem Halevi Levovitz was born in 1873 (5633 in the Jewish calendar) in Lyuban, Minsk Voblast, Belarus (near Slutsk) to Avraham and Chasya Levovitz. He received his education in the yeshivas of Slobodka and Kelm.

He was a disciple of Rabbi Nosson Tzvi Finkel, and Rabbi Simcha Zissel Ziv of Kelm.

He was the spiritual leader of the Mir Yeshiva in Poland until his death in 1936. His disciples were said to have followed his every word, never doing anything that they "felt" he would not want them to do. Most of the leaders of the yeshivas of inter-war Poland were Rabbi Yeruchom's disciples. They would come on occasion to visit him and seek his advice.

After World War II, much of orthodox Jewry in Europe was wiped out, along with their many yeshivas (Jewish schools of higher learning). One of the only yeshivas to survive as a whole body was the Mir Yeshiva, which managed to escape miraculously to Shanghai, China, and then on to America. Many of the new leaders of the American and Israeli yeshivas in the post-war period were students of the Mir, and thus followers of Rabbi Leibovitz.

His many discourses and lectures are preserved for posterity in the following sefarim: "Daas Torah," "Daas Chochma U'Mussar," "Shvivai Daas," and "Sifsai Daas on Pirkei Avos" which are a staple of many yeshiva libraries today, as well as many Orthodox Jewish households.

He died on the 18th of Sivan in the year 1936 at the age of sixty-three. He is buried in the town of Mir, Belarus. His grave site (recently rebuilt by his family) is a common destination for the many Jewish tourists who visit the decimated cities of pre-war Europe.

Most of his family escaped the Nazis and made it to America where they were pioneers of the rebuilding of Orthodox Jewry in the United States. His son, Rabbi Simcha Zissel Halevi Levovitz, was the founder of a yeshiva in Boro Park, Brooklyn, and was responsible for publishing the writings of his father, as well as publishing the writings of Rabbi Simcha Zissel Ziv. his son in law Rabbi Yisroel Chaim Kaplan, former rosh yeshiva in Brisk, Lithuania, came to America and served as rosh yeshiva in Beth Medrash Elyon in Monsey, NY. Reb Yeruchom Levovitz's grandson then went on to open the famous Beth Hatalmud yeshiva. Reb Leib Maalin served as the rosh yeshiva until his passing, when the leadership of the yeshiva was passed to Rabbi Chaim Visokier. After Rabbi Visokier's passing, Reb Naftali Kaplan became the rosh yeshiva along with Rabbis Sholom Menashe Gotlieb, Binyomin Zeilberger and Yisroel Perkowsky.

May the merit of the tzadik Rabbi Yeruchem Halevi Levovitz protect us all. Amen