Rabban Gamaliel II (also spelled Gamliel; Hebrew: רבן גמליאל דיבנה‎) was the first person to lead the Sanhedrin as Nasi after the fall of the second temple, which occurred in 70 CE. Gamliel was appointed nasi approximately 10 years later. 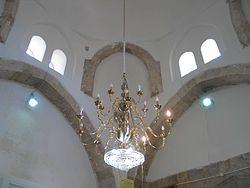 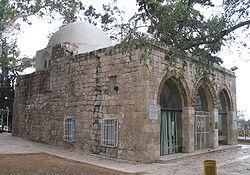 Rabban Gamaliel II (also spelled Gamliel; Hebrew: רבן גמליאל דיבנה‎) was the first person to lead the Sanhedrin as Nasi after the fall of the second temple, which occurred in 70 CE. Gamliel was appointed nasi approximately 10 years later. Gamaliel II was the son of Shimon ben Gamaliel, one of Jerusalem's foremost men in the war against the Romans, and grandson of Gamaliel I. To distinguish him from the latter he is also called Gamliel of Yavne.

Rabban Gamliel II seemed to have settled initially in Kefar 'Othnai in Lower Galilee, but with the outbreak of the war with Rome, he fled to Jerusalem. From there, he moved to Yavne. In Yavne, during the siege of Jerusalem, the scribes of the school of Hillel had taken refuge by permission of Vespasian, and a new centre of Judaism arose under the leadership of the aged Johanan ben Zakkai, a school whose members inherited the authority of the Sanhedrin of Jerusalem. Gamaliel II became Johanan ben Zakkai's successor, and rendered immense service in the strengthening and reintegration of Judaism, which had been deprived of its former basis by the destruction of the Second Temple and by the entire loss of its political autonomy. He put an end to the division which had arisen between the spiritual leaders of Judaism by the separation of the scribes into the two schools called respectively after Hillel and Shammai, and took care to enforce his own authority as the president of the chief legal assembly of Judaism with energy and often with severity. He did this, as he himself said, not for his own honor nor for that of his family, but in order that disunion should not prevail in Israel.

Gamaliel's position was recognized by the Roman government also. Towards the end of Domitian's reign (c. 95 CE), he went to Rome in company with the most prominent members of the school of Javneh, in order to avert a danger threatening the Jews from the action of the emperor. Many interesting particulars have been given regarding the journey of these learned men to Rome and their sojourn there. The impression made by the capital of the world upon Gamaliel and his companions was an overpowering one, and they wept when they thought of Jerusalem in ruins. In Rome, as at home, Gamaliel often had occasion to defend Judaism in polemical discussions with pagans, and also with professed Christians.

Rabban Gamaliel II directed Simeon ha-Pakoli to edit the Amidah and make it a duty, incumbent on every one, to recite the prayer three times daily. Also, he directed Samuel ha-Katan to write another paragraph against informers and heretics.

He was on friendly terms with many non-Jews, and was so warmly devoted to his slave Tavi that when Tavi died he mourned for him as for a beloved member of his own family. Still, Gamaliel and his sister, Ima Shalom, chided with the growing local Christian population, even mocking a certain gentile judge who had adjudicated in an inheritance case, in which Ima Shalom had made herself the make-believe claimant in the case. When the judge at first ruled in favor of the woman, after being given a bribe by Rabban Gamaliel, he quickly rescinded the verdict in favor of Gamaliel. The story includes a reference to the words of Jesus in Matthew 5:17, with one possible reading of the story indicating that it was Gamaliel making this reference.

He loved discussing the sense of single portions of the Bible with other scholars, and made many fine expositions of the text. Gamaliel died before the insurrections under Trajan had brought fresh unrest into Israel. At his funeral obsequies the celebrated proselyte Aquila (Akylas Onkelos), reviving an ancient custom, burned costly materials to the value of seventy minae. Gamaliel himself had given directions that his body was to be wrapped in the simplest possible shroud. By this he wished to check the extravagance which had become associated with arrangements for the disposal of the dead, and his end was attained; his example became the rule, and it also became the custom to commemorate him in the words of consolation addressed to the mourners. Gamaliel's son, Simon, long after his father's death, and after the persecutions under Hadrian, inherited his office, which thenceforward his descendants handed on from father to son.

Gamaliel was a controversial leader. He was implicated in the 'excommunication' of his own brother-in-law, Eliezer ben Hyrcanus. In a dispute about fixing the calendar, Rabban Gamaliel humiliated Rabbi Joshua ben Hananiah by asking him to show up with his "stick and satchel" (weekday attire) on the holy day which according to Rabbi Joshua's calculation was Yom Kippur. Later on, another dispute broke out regarding the status of the nightly prayer, and he humiliated him again by asking him to stand up, and to remain standing while teaching his students. This incident shocked the Rabbis, and subsequently is said to have led to a rabbinic revolt against Gamaliel's leadership of the sanhedrin. The Sanhedrin installed Rabbi Eleazar Ben Azariah as the new Nasi. After reconciling with Rabbi Joshua, Rabban Gamaliel was reinstated as Nasi, with Rabbi Eleazar serving along with him in a rotation every third week. According to the version recorded in the Jerusalem Talmud, Rabbi Eliezer served as Av Beit Din, effectively as a viceregent.

May the merit of the tzadik Rabban Gamaliel II protect us all. Amen