Greatest of all commentators 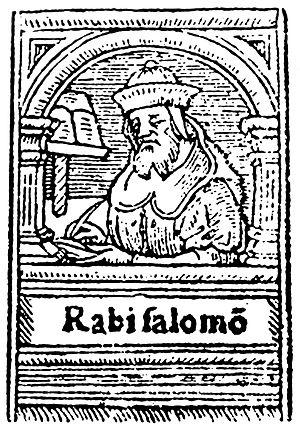 Known as Rashi, the acronym for the first letters of his name. The most famous commentator.

Rashi's greatness as a commentator is unparalleled; his words are studied daily by students and scholars, in the yeshivah and in the Jewish home.

He traced his ancestry through the Tanna'im (teachers of the Mishnah) Rabbi Yochanan HaSandlar and Hillel the Elder back to King David. He received his early talmudic training from his father, Rabbi Yitzchak. At the young age he went to Worms, Germany, to broaden his knowledge under Rabbi Yaakov ben Yakar. At the age of 25 he returned to his native Troyes, as a highly respected and prominent talmudist. Out of great humility he refused to accept a rabbinic post. He wrote his commentaries and was a teacher, earning his livelihood as a wine merchant.

Rashi's commentary on the Torah is included in virtually all editions of the Chumash (Pentateuch). In a clear and concise style he gave both the simple meaning of the text and its homiletic interpretation, based on Talmud and Midrash. He explained the text phrase by phrase, often commenting on grammatical anomalies and translating difficult words into Old French. Besides his Torah commentary, he also wrote a commentary on the Prophets and Writings.

Rashi's work has become a part of Jewish life, the favorite commentary of the common man and scholar alike. A measure of Rashi's greatness is the fact that 200 books have been written, probing his words. His commentary to the Talmud is a masterpiece of clarity and brevity. Without it, the Talmud would be a closed book. Rashi gently takes the student by the hand, guiding him through the maze of complex forms of reasoning, obscure concepts, and knotty legal arguments. In clear and simple Hebrew, he clarifies the Talmudic text, almost line by line, anticipating the difficulties the student will encounter.

Rashi's Torah commentary was the world's first dated book printed in Hebrew and was widely distributed.

Rashi is also important for students of French. Many words in the Bible were unknown to Rashi's students, and obviously there would ask what a particular word meant and Rashi would give the answer in Old French using Hebrew transliteration. These transliterations provide important insights into the development of French and its pronunciation.

Rashi accomplished all this during the Period of the Crusades, when life was extremely dangerous for the Jew; yet, in his works, one hears none of the violence of the mobs, but only the sweet sounds of the Torah. There is a legend that Godfrey(one of the leaders of the Crusaders) received an audience with Rashi and asked whether he would be successful on his mission. Rashi replied that he would be initially victorious but his forces would eventually be decimated and he would return with only three horses. Reacting as though this was some type of hex, the furious Godfrey swore that if he returned with even four horses he would destroy the Jewish community of Troyes. Godfrey returned with four of his horses remaining, which he guarded with his life. As he passed through the city wall of Troyes, a stone dislodged from the wall and struck one of the horses dead. Rashi's words came true.

Rashi had three daughters, who were great scholars in their own right, but also were married to men of greatness, and had children known as the "Baalei Tosafot" (Those who Extended),  individual scholars who stood on the giant shoulders of their grandfather, and queried and examined, extended and sometimes argued with his explanations of the Talmud, in the immortal tradition of Jewish scholarship. The most famous of these Tosafists was Rashi's grandson, Rabbeinu Tam, who frequently disagreed with his grandfather, he also said: "I could have duplicated my grandfather's commentary on the Talmud, but I could not duplicate his commentary on the Torah.".

May the merit of the tzaddik  RASHI protect us all, Amen.