Rabbi Avraham Dov of Avritch was a rabbi from Ukraine, first in Avritch and later in Zhitomir. In 1830 he moved to Eretz Yisroel and became the head Ahskanazi rav of Tzfat. 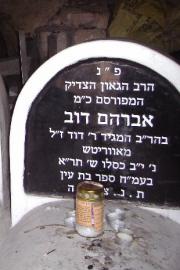 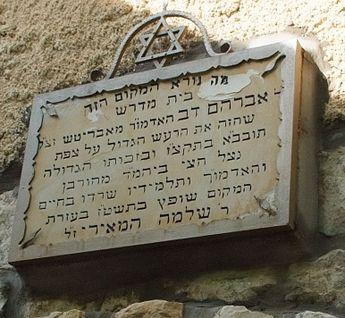 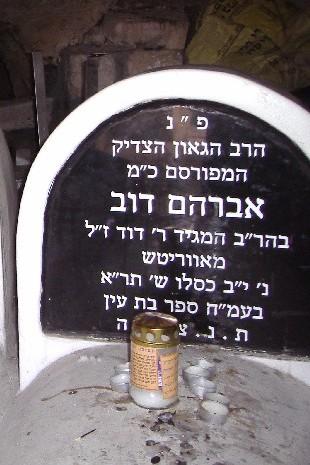 Ukraine
Rabbi Avraham Dov was born in 1765 in Chmielnik, Ukraine to Rabbi Dovid a local maggid. In his youth he studied under Rabbi Nachum of Chernobyl. At age 20 Rabbi Avraham Dov replaced his father as Av Beis Din in Chmielnik, holding that position until 1785 when he replaced his father-in-law Rabbi Nassan Nota after his passing as Rav of Avritch. He held this position for 40 years, after which he became Rav in the much larger town of Zhitomir, where he attracted many chassidim.

In 1830 at the age of 70 Rabbi Avraham Dov of Avritch left all his Chasidim and moved to Eretz Yisroel, settling in Tzfat. There he assumed the role as the leader of the Ashkanazi community and established his own beit meidrash.

In 1837 a massive earthquake hit Tzfat that leveled the city and left thousands dead and wounded. Moments before the earthquake, Rabbi Avraham Dov shouted to the congregants of his beis medrash who stood at the end of the Mincha prayer to run to him and stand by the aron kodesh. Shorty the entire building collapsed but all those that stood by the front wall were saved.

After the earthquake Rabbi Avraham Dov of Avritch worked hard to rebuild the city and did all in his power to keep its Jewish residents from abandoning it and moving to Yerushalaim. To calm their fears he made a promise that no major earthquake would ever take place again in the city of Tzfat.

In 1840 a terrible plague broke out in Tzfas. When Rabbi Avraham Dov of Avritch became ill, he announced thathe would be the plague’s last victim and his passing will atone for the entire city. He passed away on the 12 of Kislev and as he had predicted, the plague stopped immediately.

Rabbi Avraham Dov of Avritch is well renown for his book the Bas Ayin and is often referred to himself by that title. This work as completed while he still lived in the Ukraine but Rabbi Avraham Dov refused to print it until he re-edited it in the Holy Land. It is considered a basic Chassidic work and is based on the Chernobyl train of thought.

The yahrzeit of Rabbi Avraham Dov of Avritch falls out on the 12 of Kislev. Many locals and Chasidim from all over Israel visit his kever on that day.