Philosopher and Biblical commentator, at the time of the Spanish expulsion(1492). 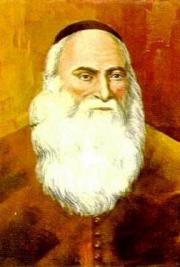 Philosopher and Biblical commentator, at the time of the Spanish expulsion.(1492)

A scion of the House of King David, Rabbi Yitzchak was a disciple of Rabbi Yosef Chayun.

The title 'Don' (HaSar) was conferred on him when he served as a minister of finance in the Spanish government. Abarbanel joined the refugees despite the entreaties of the king and queen that he stay on.

In addition to his major work, a commentary to Torah and Prophets, he composed a commentary on the book of Daniel, Mayenei HaYeshua, and two books about the advent of the Messiah Mashmia Yeshuah & Yeshuat Meshicho. These and his many other works rank him among the classical Jewish Bible commentators and thinkers. Abarbanel attacks Christian theology in his writings, a feat which in his days was very dangerous.

May the merit of the tzaddik  Rabbi 'Don'  Yitzchak Abarbanel protect us all, Amen.