Son of Jacob the Patriarch and Leah the Matriarch. He is one of the 12 Tribes. 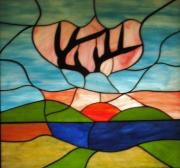 Issachar was the Son of Jacob the Patriarch and Leah the Matriarch. He is one of the 12 Tribes.

According to the Ari, Yaacov Avinu's soul was from Hevel son of Adam and the soul of his brother Esav  was from Cayin son of Adam. At the time of birth Yaacov was holding on the the heel of Esav, what he actually did was taking out the good part of Cayin in Esav which was mixed with the evil part. This positive part of Cayin, Yaacov inherited to Issachar, when Issachar was born. (Sha'ar HaGilgulim, hakdama 38)

The descendants of Issachar were sages who were experts in intercalation (Targum Yonatan, Bereishit 46:13).

The bones of Issachar were buried in Sidon (a part of Lebanon nowadays) in the inheritance that fell to his descendants (Sefer HaYashar, end of Yehoshua)

May the merit of the tzaddik  Issachar ben Yaacov Avinu  protect us all, Amen.