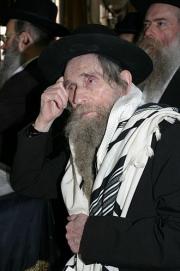 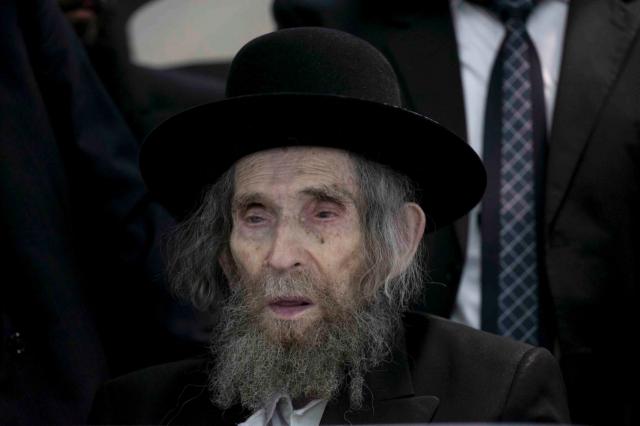 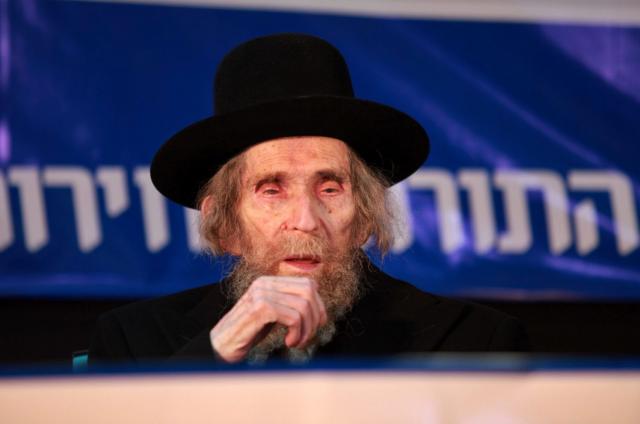 Aharon Yehuda Leib Shteinman (Hebrew: אהרן יהודה לייב שטינמן‎), also Shtainman or Steinman, 1913 – December 12, 2017) was a Haredi rabbi and posek (halakhic authority) in Bnei Brak, Israel. Following the death of Rabbi Yosef Shalom Elyashiv in 2012, he was widely regarded as the Gadol Hador (Leader of the Generation), the leader of the non-Hasidic Lithuanian Jewish world.

Aharon Yehuda Leib Shteinman was born and raised in Brest (Brisk), then part of the Russian Empire. He studied in Yeshivas Imrei Moshe, headed by Rabbi Moshe Skolovsky, in Brest, and attended shiurim (Torah lectures) given by Rabbi Yitzchok Zev Soloveitchik, the Brisker Rav. He also studied in Kletzk under Rabbi Aharon Kotler.

Upon reaching draft age in 1937, he was subject to the Polish draft, as Brest had come under the control of the newly established Polish state in the aftermath of the First World War. He and his close friend, Rabbi Moische Soloveitchik (a grandson of Rabbi Chaim Soloveitchik) tried to evade the draft by starving themselves, but they were declared fit to serve by the draft officer. The two then fled with other Brisk students to Montreux, Switzerland, where they returned to Torah study in Yeshivas Etz Chaim. With the outbreak of World War II, the two became war refugees and were incarcerated in the Schonenberg labor camp near Basel, where nearly all the inmates were Torah-observant. Shteinman and his friend were put to work laying roads, but due to his thin frame and short stature, he was released from manual labor and assigned to a desk job.

Shteinman was the only member of his family to survive the war. While still in Switzerland, he married Tamar (Tema) Kornfeld (d. 2002), the daughter of Rabbi Shammai Shraga Kornfeld of Antwerp. She had been sent to Switzerland from Poland to cure her respiratory problems and had also become a refugee when World War II broke out. The couple had four children.

Shteinman was known for his extremely modest lifestyle. His apartment on Chazon Ish Street 5, was sparsely furnished and had not been painted in many years. Until 2014, he slept on the same thin mattress that he had received from the Jewish Agency upon his arrival in Israel in the early 1950s.

During his first years in Israel, Shteinman and his family lived in Kfar Saba; his sons were sent to a cheder in Petah Tikva. Eventually they relocated to Bnei Brak, where he headed the Ponevezh Kollel. In 1955, the Ponevezher Rav, Rabbi Yosef Shlomo Kahaneman, opened the yeshivah ketanah of Ponevezh, called Ponevezh L'Tzi'irim, and asked Shteinman to serve as rosh yeshivah together with Rabbi Michel Yehuda Lefkowitz. Shteinman stopped giving his regular shiur in 1998, but retained the title of rosh yeshiva. He was also rosh yeshiva of Yeshivas Gaon Yaakov, which is led by his son-in-law, Rabbi Zev Berlin.

Shteinman was also the author of a popular series of kuntresim (pamphlets) on Torah subjects such as emunah (faith), chinuch (education), and hashgacha(Divine providence). The pamphlets are based on shiurim (Torah lectures) that he began giving to Ponevezh Kollel students in his home in 1994, and on shmuessen (ethical talks) that he began giving to students in Yeshivas Gaon Yaakov in 1978. Ranging in size from 24 to 100 pages, the pamphlets quickly sold out. An English-language translation of many of these subjects was published in 2013 by Israel Bookshop under the title Leading with Love: Guidance for Our Generation from Maran Harav Aharon Yehudah Leib Shteinman shlit"a on Torah, Emunah, Chinuch, the Home, and More.

When he was in his nineties, Shteinman undertook to visit and strengthen key Haredi and religious communities outside of Israel. In 2005 he visited a number of cities in North America with significant Haredi populations or institutions, including in Brooklyn, New York, and Passaic, meeting with many American Haredi rabbis including Rabbi Aharon Schechter of Yeshiva Rabbi Chaim Berlin.

He traveled to the Jewish community of Los Angeles on Lag Ba'omer in 2006 during a trip to America. Over five thousand individuals attended the gathering. He planned to travel together with Rabbi Yaakov Aryeh Alter, the Gerrer Rebbe, to Montreal in May 2006, but they delayed their trip to avoid protests from the Neturei Karta. After visiting Montreal, the rabbis parted ways. The Gerrer Rebbe continued to New York and then returned to Jerusalem, while Shteinman went on to visit the Jewish communities in several South American cities, including Mexico City and Buenos Aires.

Shteinman originally published his main works on the Talmud anonymously under the name Ayelet HaShachar (alluding to his initials and those of his wife, Tamar [AYeLeT = Aharon Yehuda Leib Tamar] in Hebrew, as well as the "morning star" of Psalms 22).

A few times I woke up and wrote my first will in the year 5714, after the three great rabbis of blessed memory had departed in a short time, and now I have awakened again for a number of reasons and changed what I wrote then.

A. I would very much like not to eulogize me, either in my face or in my face, and not to hold an assembly of awakening or a mourning assembly, or all sorts of names for the Swedes and their intention to eulogize.

B. Do not write any article about me in newspapers two, two, two months. And not to print a picture and not like the usual to write his history.

third. Do not print ads on Halevi ', nor notify by speaker or radio. It's enough to have only ten people at the funeral. '

D. To try not to pause between death and burial, only to hasten to be buried near death.

G. The gravestone will be the cheapest and simplest, not to waste money for buying a place in the expensive cemetery, but if you want to give charity that you give without buying a place.

H. In the days when the custom is to go to the grave, such as the brides of the thirty-seventh and the fifteenth, they will not waste too much time for it, and they should change from time to time to study regularly and without speaking then idle things.

If by searching to find a place to pray before the pillar will make a lot of Torah cancellation it is more worthwhile to study Torah for the sake of Heaven at this time.

ninth. I will ask that anyone who wants my good will learn every day from one mishnah to the end of the twelfth month, and the girls will recite ten psalms every day, on Shabbat and Yom Tov.

Y. The writings in Dina and in Aggadah should not be printed only by those who knew that I had passed them and were ready for printing.

K. I will ask not to mention me in the name of a righteous or a God-fearing person, so that I will not be despised by this in the world of truth.

L. I would very much ask forgiveness from anyone who harmed his honor, and whoever I owe him money and is not known and who in reality will not be charged [ie, he can not collect by law], please forgive me.

M. All the descendants of Halutzi will not follow the bed according to the custom of Jerusalem.

****
Hand. Since many people are wrong with me, so I advise not to name children in my name, but I do not forbid it.

May the merit of the tzadik Rabbi Aharon Yehuda Leib Shteinman protect us all. Amen