Rabbi Samuel ibn Naghrillah also known as Samuel HaNagid (born 993; died after 1056), was a medieval Spanish Talmudic scholar, grammarian, philologist, soldier, merchant, politician, and an influential poet who lived in Iberia at the time of the Moorish rule. His poetry was one area through which he was well known. He was perhaps the most politically influential Jew in Muslim Spain. 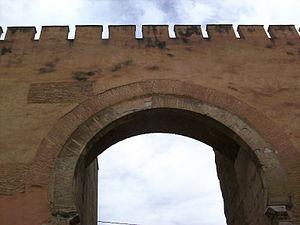 Rabbi Samuel ibn Naghrillah was an Andalusian Jew born in Mérida in 993. He studied Jewish law and became a Talmudic scholar who was fluent in both Hebrew and Arabic.

He started his life as a shopkeeper and merchant in Córdoba. However, civil war broke out in 1009 against the Amirid Kingdom and Berbers took the city in 1013, forcing him to flee from Córdoba. In Málaga, he started a spice shop. His relations with the Granada royal court, and his eventual promotion to the position of vizier, happened in a coincidental manner. Jacobs, pulled from the Sefer Seder ha-kabbalah this interesting account. The shop he set up was near the palace of the vizier of Granada, Abu al-Kasim ibn al-Arif. The vizier met Samuel ibn Naghrillah when his maid servant began to ask Naghrillah to write letters for her. Eventually Naghrillah was given the job of a tax collector, then a secretary, and finally an assistant vizier of state to the Berber king Habbus al-Muzaffar.

When Habbus died in 1038, Samuel ibn Naghrillah made certain that King Habbus’ second son, Badis, succeeded him, not his first born, Bulukkin. The reason behind this act was that Badis was more favored by the people, compared to Bulukkin, with the general Jewish population under Samuel ha-Nagid supporting Badis. In return for his support, Badis made Samuel ibn Naghrillah his vizier and top general. Some sources say that he held office as a viziership of state for over three decades until his death in 1056. Because Jews were not permitted to hold public office in Islamic nations as an agreement made in the Pact of Umar, that Samuel Nagid, a Jew or dhimmi, should hold such a high public office was rare. His example was used to support the Golden Age theory, regarding Jewish life under Muslim rule, rather than the lachrymose view. His unique position as the viziership made him the highest ranking Jewish courtier in all of Spain. Recognizing this, in the year of 1027, he took on the title of nagid, or Prince. The peculiar fact regarding his position as the top general in the Granada army was that he was a Jew. That a Jew would command the Muslim army, having them under his authority, was an astonishing feat. Other leading Jews, including Joseph ibn Migash, in the generation that succeeded Samuel ha-Nagid, lent their support to Bulukkin and were forced to flee for their safety.

As a Jew, Samuel ha-Nagid actively sought to spread Jewish culture and values and dutifully performed public service. The Nagid became the leader of Spanish Jewry around the late 1020s. He promoted the benefits of the Jewish people through various acts. One action he did was to promote Jewish learning, by purchasing many copies of the Holy Scriptures, which are the Mishnah and the Talmud. He also promoted the study of the Talmud by giving a form of scholarship to those who wanted to study the Torah for a living. He died in 1056 of natural causes.

It has often been speculated that Samuel was the father or otherwise an ancestor of Qasmūna, the only attested female Arabic-language medieval Jewish poet, but the foundations for these claims are shaky.

Kfar HaNagid, a moshav in modern Israel was named after him.

In 1049 CE, Samuel ibn Naghrillah arranged a marriage for his son Joseph ibn Naghrela (Joseph ibn Naghrillah) (1035-1066), who married the only daughter of the most respected Torah sage of the generation, Rav Nissim Gaon of Kairouan.:xix Joseph succeeded his father as vizier of Granada before he turned twenty-one. Many Muslims, envious of his position and unhappy with Joseph's excesses, accused him of using his office to benefit Jewish friends. Joseph ha-Nagid was assassinated in a mob uprising against him on December 30, 1066. The people then proceeded to crucify his body upon the city's main gate. The following morning on December 31, 1066, the massacre of Granada's Jews began and a mob went on a rampage in Granada, killing a large number of Jewish inhabitants. The Jewish community was later reestablished but was destroyed again in 1090 by the Almoravids.

Samuel Nagid was a famous Hebrew poet of the Middle Ages, as well a patron of many other poets, and was well known for his poetry. Eban says that the Nagid's influence was in that he established a new style of Hebrew poetry by applying aspects of Arabic poetry to biblical Hebrew. This unique application made Hebrew poetry access the major genres of Arabic poetry. He also wrote poetry in the battlefield. When he defeated the allied armies of Seville, Malaga and the Berbers on Sept. 8, 1047 at Ronda, he wrote in his Hebrew poem of gratitude for his deliverance: "A redemption which was like the mother of my other redemptions and they became to it as daughters."His main poetic works include "Ben Tehillim" (Son of Psalms), "Ben Qoheleth" (Son of Ecclesiastes), and "Ben Mishlei" (Son of Proverbs), each of which imitates the "father work". He founded the Yeshiva that produced such brilliant scholars as R' Yitzhaq ibn Ghiath and R' Maimon ben Yosef (father of Maimonides).

May The merit of the tzadik  Rabbi Samuel ibn Naghrillah protect us all. Amen