Kabbalist and chief rabbi of Cracow. 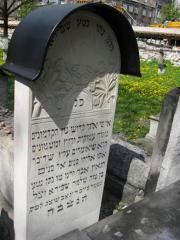 Kabbalist, and chief rabbi of Cracow.

Rabbi Natan Neta is better known as 'Megale Amukot' - revealer of the depths, the title of his main work. In 'Megale Amukot' he writes 252 commentaries on Moses's pleading before G-d to be allowed to enter the land of Israel. Rabbi Natan Neta disseminated the kabbalistic teachings of the Ari in Poland. Thousands of people followed him as a teacher.

On the tomb stone of  Rabbi Natan Neta, it says that "Eliyahu HaNavie (Elijah the Prophet) spoke to him face to face."

Rabbi Chaim of  Tzanz said about Rabbi Natan Neta, that his powers were so great, that when someone would just mention before him the name of a sick person, that person was immediately healed.

The Hebrew word nassi ("leader") is an acronym of the phrase nitzotzo shel Yaakov Avinu, "a spark of Jacob our father." The soul of every leader of Israel is an offshoot of the soul of Yaakov, father of the people of Israel (Megaleh Amukot, section 84).

Rabbi Natan Neta and the 'Nistar'  (a tzaddik who remained anonymous)

Rabbi Bunim realized that ever since the young man, Dov, had come to work for him in his store, business had picked up. He attributed the fact merely to Dov's devotion and efficiency. It had been a lucky move to take on the extra helper even though the young man had been a stranger in Cracow whom no one had known. When Dov had originally offered himself for the job he had asked for one term only; that he be allowed to go to the synagogue morning and evening to pray.

One morning a large influx of customers descended upon R' Bunim's store. He was helpless without his faithful worker who was still in the synagogue. "What can he be doing there so long?" wondered the storekeeper.   When half an hour had passed and the young man had still not returned, the storekeeper decided to go and fetch him in person. "If he is still praying, I wont say anything," he  thought. When R' Bunim burst into the synagogue and found his assistance staring at the paintings on the ceiling, his temper burst forth in full fury. He strode over to him and gave him a resounding slap on his cheek. It was such a loud smack that everyone turned to look at the scene. R' Bunim was ashamed and quickly went back to his customers.

Young Dov removed his teffilin carefully, wound them up into their case and left the synagogue for the last time. He went straight to the rav of the city, Rabbi Natan Shapira, who was a close friend of his, to say his goodbyes.    "Why are you leaving me?" R' Natan wept in genuine sorrow. Seeing that his pleas had no effect upon his young friend, he said,  "At least let us part with words of Torah, as good friends should. I have been laboring at my book Megaleh Amukot, transcribing 252 explanations for the verse in Parashat Va'Etchanan "Al tosef ledaber ailai badavar hazeh - Do not continue to speak to me on this matter," corresponding to the numerical equivalence of "Rav lach". Can you offer yet another explanation for this verse in which God rejects Moshe Rabeinu's pleas to enter Eretz Yisrael ?"

"Yes," Dov replied. "There is one hidden explanation, not touched upon in your work. There are four heavenly animals which support the celestial merkava. God's throne also has four pedestals. Moshe Rabeinu desired to enter Israel so that through its holiness he could become worthy of being the fourth support. God told him to refrain from mentioning his entry again. 'Rav Lach.' It is enough. The word 'badavar' forms the acrostic 'Ben David beregel revi'it.' God told Moshe to refrain from praying since the fourth pedestal would be King David." (the first 3 pedestals were taken by Avraham, Yitzchak & Yaakov)

With these words, the young man took his leave from the rabbi of Cracow, The 'Megale Amukot'.

Meanwhile R' Bunim realized that Dov would never return to work for him. He regretted his hasty, hotheaded reaction. Dov had been a devoted and hard-working employee. How could he apologize for the shame he had caused him publicly? R' Bunim went to The 'Megale Amukot' with his problem. Rabbi Natan Neta already knew all about it.

He told him "Your worker did not even feel the slap you gave him. It meant nothing to him, physically. The one you really harmed is me. Through your action I lost a very dear friend, a companion, an equal. He is already very far away from here and I will never see him again. The only souvenir I have of him are the words of Torah which he told me before he left. This alone remains with me to ease my pain."

Rabbi Natan left the world at the young age of 48.

May the merit of the tzaddik  Rabbi Natan Neta Shapira  protect us all, Amen.