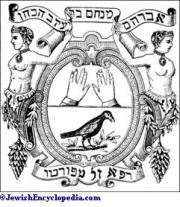 Polish Talmudist; born at Lemberg in 1584; died in 1651 (June 7); son of R. Israel Jelriel Rapoport of Cracow and son-in-law of R. Mordecai Schrenzel of Lemberg. Rapoport was a pupil of R. Joshua Falk ha-Kohen. For forty-five years he was at the head of a large yeshibah at Lemberg. Being very wealthy, he had no need of seeking a rabbinical position; and he was able, therefore, to expend large sums in behalf of the pupils of his academy. He was president of the Council of Four Lands, and was administrator of the money collected for the poor in the Holy Land. Rapoport's "Etan ha-Ezraḥi" (printed at Ostrau, 1796) is divided into two parts. Part i. contains responsa and decisions; part ii., called "Ḳonṭres Aharon," contains sermons on the weekly sections of the Pentateuch. He is said to have written a number of works which have been lost.