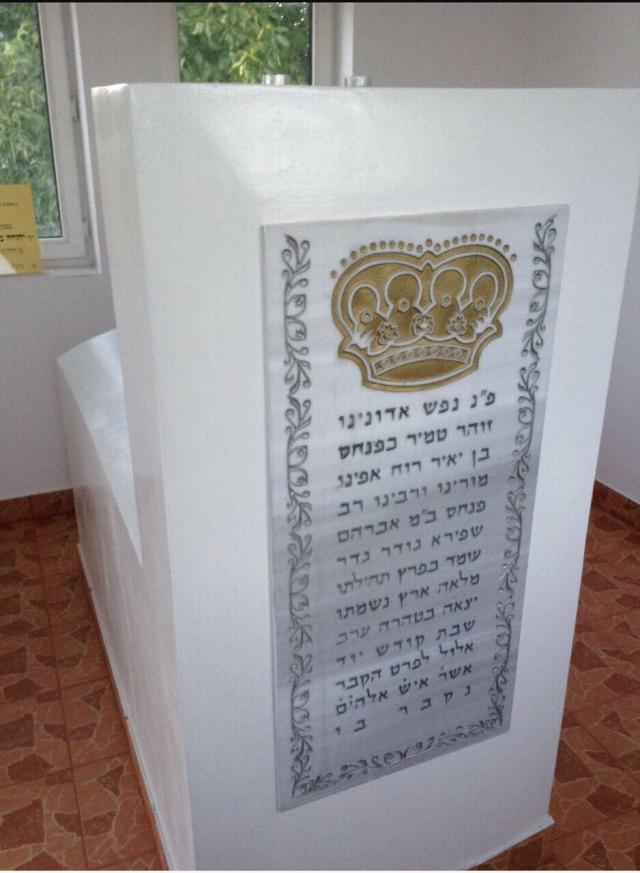 One of the pillars of the Chassidic movement, Rabbi Pinchas was the son of Rabbi Avraham Abba, and a descendant of Rabbi Natan Shapira, the author of Megale Amukot. He received a thorough Lithanian-style Torah education, becoming proficient in Tanach and Talmud, as well as in the halachic codes and responsa. He also gained great expertise in Hebrew grammer and the writings of the great medieval philosophers. While still in his youth he wrote Talmudic dissertations and halachic novellae.

His father, Rabbi Avraham Abba, a firm opponent of Chassidism, was forced to leave Shklov in the wake of a blood libel. He moved his family to Mirpol in Volhynia where he met the Baal Shem Tov and became a dedicated follower of Chassidut. His son Pinchas also fell under the spell of the Baal Shem Tov, becoming one of the closest disciples of the charismatic leader of the new movement.

The Baal Shem Tov is reported to have said about R' Pinchas, "A soul such as that of R' Pinchas comes down to this world only once in 500 years." At the Baal Shem Tov behest Rabbi Pinhas settled in Koretz where he studied the mysteries of the Torah and labored at perfecting his way of life, striving for uncompromising truthfulness and conquering all traces of arrogance. Recognizing the purity of his soul, many people from all walks of life, among them outstanding rabbis, joined the circle of his disciples.

For unknown reasons Rabbi Pinchas moved to Ostroh in Volhynia, after having stayed in Koretz for 20 years. In 1790 he decided to settle in Tzfat, Eretz Yisrael. En route, he sojourned in Shipitovka. It was there that he fell ill and died.

Rabbi Pinchas devoted many hours for the study of the Zohar, and instructed his disciples to learn Zohar every day. He said that the study of Zohar is a good remedy for sustenance  and conquering all traces of arrogance.

Rabbi Pinchas did not write any books. His thoughts are mentioned in the writings of many other rebbes.  The comments and insights of R' Pinchas have been anthologized by his students under various titles: Pe'er LaYesharim, Nufet Tzufim, and others. A comprehensive compendium was published, entitled Imrei Pinchas , from a manuscript that survived the Holocaust and was discovered in Poland.

The words of wisdom of Rabbi Pinchas of Koretz are written in the book : Midrash Pinchas.

About Anger... "For many years I wrestled with my Anger, until finally I conquered him and placed him in my pocket. Now I take him out only when I need him. But I am so angry with him, that I do not ever want to take him out again!"

About Prayer..."A prayer which is not said in the name of all of Israel is not a prayer." If we look at most of the formal prayers they are not for ourselves but for all of us. They are not written in the singular but in the plural. We pray in a congregation to remind us that we are not alone in our needs.

The Source of Depression...The root of gloominess is pride. An arrogant person thinks that the world owes him honor and respect. He always feels slighted, believing that people disdain and snub him. As a result, he always is in a somber mood. A humble man cheerfully accepts everything that comes his way. (Midrash Pinchas)

Rabbi Pinchas of Koretz explained: [At the time of creation the light of God flowed from the sphere of the spiritual down to the physical world through a serious of vessels or emanations.] But the vessels proved unable to contain the Divine Light. They broke. This primordial catasrophe is called shevirat hakeilim, the breaking of the Vessels. You can better understand it with an analogy. Think of a man who is deeply troubled and depressed. Suddenly he receives an exhilarating piece of good news. His troubles are over. Instead of jumping for joy, the man will break down crying. The "bright light" of teh Good news was too much for him. Similarly, shevirat hakeilim means the the vessels broke because they could not encompass the brilliant splendor of the luminescent Divine Light. (Imrei Pinchas, Bereshit 9)

R' Pinchas  lived in terrible poverty. His house was shabby and it looked ready to fall at any moment. Once, R' Pinchas' chassidim in another town invited him to spend Shabbat with them. In honor of the occasion, they bought him a new suit and prepared a beautiful apartment in which he would stay. On Friday night, R' Pinchas was in high spirits. He said: "Here, where I am a guest, they feed me on silver platters like a wealthy man, whereas at home, the poverty reaches every corner of my house. I assume that my chassidim learned to treat me this way from the Torah itself."

He explained: "Parashat Pinchas contains a description of the sacrifices for all of the holidays, yet this parashah's regular place (its 'home') is during the depressing Three Weeks. On the other hand, when this parashah comes as a guest, it is a holiday  (i.e., on each of the holidays, we read the day's sacrifices from Parashat Pinchas as a maftir).

But then, the word began to spread, perhaps from fellow disciples of Rabbi Israel Baal Shem Tov, that Rabbi Pinchas was very, very special. People began to visit him on a regular basis, seeking his guidance, requesting his support, asking for his prayers, and beseeching his blessing. The more he helped them, the more they came. The trickle to his door became a stream, and the stream became a daily flood of personal stories and requests for help.

Rabbi Pinchas was bewildered. He felt he was no longer serving G-d properly, because he no longer had sufficient time to study, pray and meditate as he should. He didn't know what to do. He needed more privacy and less distraction, but how could he turn away dozens and even hundreds of people who genuinely felt that he could help them? How could he convince them to seek elsewhere, to others more willing and qualified than he?

Then he had an idea. He would pray for heavenly help in the matter. Let God arrange it that people not be attracted to seek him out! Let God make him be despicable in the eyes of his fellows!

"A tzaddik decrees and Heaven agrees," they say. Rabbi Pinchas prayed and so it became. No longer did people visit him. Not only that, on those occasions when he went to town, he was met with averted heads and a chilly atmosphere. Rabbi Pinchas didn't mind at all. Indeed, he was delighted. The old pattern was restored; rarely was he interrupted.

Then the "Days of Awe" of Rosh Hashanah and Yom Kippur passed, and there remained only four brief busy days to prepare for the Sukkot festival. In previous years, there had always been some yeshiva students or local townspeople who were only too glad to help the pious rabbi construct his sukkah-hut. But this time, not a single soul arrived. No one liked him, and no one even thought to help him.

Not being handy in these matters, the rabbi didn't know what to do. Finally, having no choice, he was forced to hire a non-Jew to build his sukkah for him. But the goy did not possess the tools that were needed, and Rabbi Pinchas could not get a single Jew in the neighborhood to lend him tools because they disliked him so much. In the end, his wife had to go to borrow them, and even that was difficult to accomplish due to the prevailing attitude towards her husband. With just a few hours remaining till the onset of the festival, they finally managed to complete a flimsy minimal structure.

As the sun slid between the forest branches and the Rebbetzin lit the festive candles, Rabbi Pinchas hurried off to shul. Despite his solitary ways, he always made a point to attend the congregational prayers on the holidays; besides he didn't want to miss the opportunity to acquire a guest for the festival meal, something so integral to the essence of the holiday.

In those days in Europe, people desiring an invitation to a meal would stand in the back of the shul upon the completion of the prayers. The householders would then invite them upon their way out, happy to so easily accomplish the mitzvah of hospitality. Rabbi Pinchas, unfortunately, did not find it so simple. Even those without a place to eat and desperate for an invitation to a sukkah in order to enjoy the festival meal, turned him down without a second thought. Eventually, everyone who needed a place and everyone who wanted a guest were satisfied, except for the tzaddik, Rabbi Pinchas.

He trudged home alone, saddened and a bit shaken up at the realization that he might never have another guest, not even for the special festive meal of the First Night of Sukkot. Alas, that too was part of the price of his freedom.... It was worth it, wasn't it?

Pausing just inside the entrance to his sukkah, he began to chant the traditional invitation to the Ushpizin, the seven heavenly guests who visit every Jewish sukkah. Although not many are privileged to actually see these exalted visitors, Rabbi Pinchas was definitely one of the select few who had this exalted experience on an annual basis. This year, he raised his eyes and saw the Patriarch Abraham--the first of the Ushpizin and therefore the honored guest for the first night of the festival--standing outside the door of the sukkah, keeping his distance.

Rabbi Pinchas cried out to him in anguish: "Father Abraham! Why do you not enter my sukkah? What is my sin?" Replied the patriarch: "I am the embodiment of chessed, serving G-d through deeds of loving-kindness. Hospitality was my specialty. I will not join a table where there are no guests."

The crestfallen Rabbi Pinchas quickly re-ordered his priorities. He prayed that everything be restored to as it had been, and that he should find favor in the eyes of his fellows exactly as before. Again his prayer was answered. Within a short time, throngs of people were again finding their way to his door; seeking his guidance, asking his support, requesting his prayers, and beseeching his blessing. No longer could he devote all or even most of his time to his Torah-study, his prayer, and to his meditation. But thanks to his holy Sukkot guest, this was no longer seen as a problem.

May the merit of the tzaddik  Rabbi Pinchas of Koretz  protect us all, Amen.