Rabbi Asher Freind (Rabbi Usher, by his followers)  was a tzadik Jerusalemite who was known for his work in the field of Mentally ill's  work and his assistance to the needy. Established "Yad Ezra". 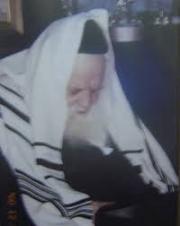 Rabbi Asher Freund was born to Rebekah Devorah, the daughter of Rabbi Avraham Sternberg of Safed, and of the family of Rabbi Aharon HaGadol of Karlin, and of Aryeh Mordechai, the fifth generation of the holy Jew (Rabbi Yaakov Yitzchak ZT”L).

From an early age he helped the poor and the downtrodden. People turned to him for advice and blessing.

Those who sought his face waited in his yard for hours at most hours of the day. They considered this waiting as a vital stage in the work of the soul which might bring soul correction. Rabbi Freund used to accept women and talk to them about their distress, as opposed to what is acceptable to some of the ultra-Orthodox public.

His descendants are Avraham Freund (husband of Bela Freund), who died while his father was alive; Leah Klairs (wife of Rabbi Shmuel Kliers, former inspector of independent education); Chaya Wasserman (the wife of the dayan Rav Elimelech Wasserman) and the educator Pnina Hershtik (wife of Rabbi Moshe Hershtik of Tel Aviv). His granddaughter Zehava nee Clairs is the wife of the ultra-Orthodox author Yair Weinstock.

A community evolved around Rabbi Freund, who continues to operate today, led by his students, and operates the Yad Ezra institutions and organizations (see below). The community has synagogues in Jerusalem and Beitar Illit.

Rabbi Freund was influenced by several streams of thought, including the book Pri Ha’aretz of Rabbi Menachem Mendel of Vitebsk, and from the book Yismach Yisrael by Admor Yerachmiel Danziger of Alexander, whose close friend was Rabbi Gedalia Koenig, one of the Rabbis of Bretlav, who was in contact with rabbis and other Admorim . He spoke to psychiatrists and psychologists who came to consult him and consulted him.

The purpose of man according to Rabbi Freund is the devotion of the Creator. To do so, he asked his followers to see every event in their lives, good or bad, as a "reason," meaning as a matter of taste and meaning, and as a direct message from the Creator. The "reason" comes to man in order to direct him to "adherence to the Creator," that is, linking all his powers to his reality, which is in the Creator's entirety. Rabbi Freund used to go out with his followers to "retreat" in the day and especially at night.

According to his teachings, man is a "broken vessel" (a term taken, among others from the teachings of the Holy Ari), and the Hassidic group united under the leadership of a tzaddik may contribute to the correction of man, just by being part of the group. As a pre-requisite to following the ways of the Torah, a man should humble himself, A value developed by Rabbi Yisrael Baal Shem Tov, whose successors called it "the abolition of the self"

In the 1960s he founded the "Yad Ezra" institutions. These institutions included a printing press and a kitchen that employed mentally disabled people for inclusion in community life. In addition, a number of kindergartens were set up on behalf of the needy, housing projects in Jerusalem and Ashdod, a hostel in Meron and a yeshiva in the Yemin Moshe neighborhood of Jerusalem.

A banquet hall was established for the first time, which held events at  cost prices in the city of Bnei Brak.

May the merit of the tzadik Rabbi Asher (Usher) Freund protect us all. Amen