Son of the Maggid of Mezritch. 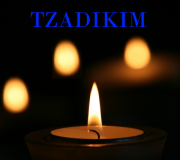 Rabbi Avraham was the son of the Maggid, Rabbi Dov Ber of Mezritch, the Baal Shem Tov's successor.

Through many years of marriage, the Maggid remained childless. After he met the Baal Shem Tov, his master declared that despite his frailty, he would live long and father a son so pure and holy that people would hardly think him human.

Born in 1741, that son was known as Rabbi Avraham the Malach (angel), because an angel appeared to his mother to herald his birth, and because he was as angelically free of temptation as his sainted father.

From his earliest youth, R' Avraham led an other-worldly existence. He would remain in his room the entire day, crowned with Tefillin and engrossed in study. Enveloped in his Tallit, he could neither see nor be seen. Thus he shielded himself from the material world and anything entrenched within it.

R' Yisrael of Rizhin recalled: "When R' Zusia of Onipol uttered HaShem's Name, he was seized with such fear that his limbs trembled, and his blood ran cold. He had to ask HaShem to insulate him against such awe. But my grandfather was an angel who subsisted on nothing more than a pigeon skin a day. His fear of HaShem never left him for a moment."

The Malach's other-worldliness was so extraordinary that when his father sought to find him a wife, he exclaimed, "How can one descend to such physicality?" Only because of the sanctity of the mitzvah did he agree to marry.

R' Feivel's wife was quite amused by this notion, for she had never heard of the Maggid, and her daughter was only twelve years old. But R' Feivel agreed to the match.

As they wrote the t'naim (engagement agreement), the Maggid's emissaries stressed that the wedding mustn't be delayed. The wedding and week of sheva brachot abounded in rejoicing, festivity and divrei Torah. The bride's mother returned to Kremenitz filled with joy, for she had never seen anything like it.

R' Avraham's new wife was not a simple woman. Twice, she dreamed that a tribunal of distinguished-looking sages wanted to take away her husband, but she screamed and pleaded his case. In the third occurrence of this dream, the court decreed, "Your defenses are so strong that we will allow him to remain with you for another twelve years." The next morning, the Maggid thanked her profusely for her efforts, which had granted his son another 12 years of life. After his death, the Maggid appeared to his daughter-in-law in a dream whenever necessary. One night he told her, "Tell your husband to change rooms, or at least to move his books into your room." Her husband, however, dismissed the matter. The next night, a fire broke out in R' Avraham's room, burning his entire library.

R' Avraham did not succeed his father as the leader of the Chassidic movement. Instead, he settled in Fastov, far from the center of Chassidut, where he lived in isolation. He himself said, "A certain type of Tzaddik cannot lead his generation, for they cannot relate to him. Due to his great intellect, he cannot sink low enough to uplift them."

"What do I have to do with you," R. Avraham replied, "my father of flesh and blood? My soul yearns for my exalted Father!"

"My son," inquired R. Dov Ber, "if I am not your father, why did you accept your inheritance?"  "I hereby renounce it," declared the Malach. That moment, fire engulfed his house, consuming everything the Maggid had bequeathed him.

Shortly thereafter, on the eve of Yom Kippur, R' Avraham donned the white, silken bekeshe his father had worn on the High Holidays. But when he entered the synagogue, the flame of a lit candle leaped onto the robe and incinerated it. Thus were severed his ties to his forebears and to all flesh and blood.

When R. Avraham once visited his father-in-law in Kremenitz the whole town came out to greet the wondrous man known to everyone as the Malach. But R. Avraham ignored them and merely stared at a tall mountain. The people anxiously awaited a word from the Malach, but he remained lost in thought.

Among those present was a young mitnagged who was very impressed with his own learning and lineage, and very unimpressed by R. Avraham's strange behavior. Unable to restrain himself, he demanded, "Why are you staring at that mountain for so long? It's only a clump of earth!"

"I am staring in amazement," the Malach replied, "How could such a simple clump of earth be haughty enough to become a tall mountain?"

The young man trembled and squirmed as these words penetrated his heart.

At the seder that night, after tasting only a small piece of matzo, Dr. Gordia suddenly felt as if his entire body were burning. "The Rebbe!" he gasped.

The members of his household rushed to the Maggid, who prescribed a remedy. The next day, R' Dov Ber said that only because Dr. Gordia was his doctor had he been allowed to remain alive. Otherwise, the intense kedushah (holiness) of the matzah would have consumed him.

The Baal Shem Tov's grandchildren, Rabbi Moshe Chaim Ephraim and Rabbi Baruch, once came to gaze upon the Malach. Afraid to enter his room, they peeked through a window instead. When R. Avraham arose and R. Baruch looked into his face, he became so frightened that he grabbed his brother and ran, leaving behind his books and his coat in his haste.

Rabbi Nachum of Chernobyl once performed a brit milah, and R. Avraham served as the sandek. A large crowd gathered in the synagogue, eager to see the reclusive Malach. But when he arrived, all but twenty of the people bolted, and the shamash was afraid to speak to him. When the Malach approached the bimah, R. Nachum became so startled that he dropped the mohel's knife, and forgot whether he had pronounced the blessing over the milah. When he returned home, R. Nachum sat down, silent and bewildered. His attendant brought him coffee, and twice he refused, saying: "How can we drink when we know that there is a man who serves HaShem with such loftiness?"

The Malach's Avodat HaShem was very intense. Once, as he prayed, his soul began to depart from his body. R. Shneur Zalman instructed those near him to replace his Rashi Tefillin with those of Rabbenu Tam. Only then did he return to his normal self.

R. Nachum learned of R. Avraham's death a few days later, on Sukkot. Banging his head against the wall, he cried continuously for two hours. Finally, his chassidim carried him into the Sukkah and said, "Rebbe, remember that today in Yom Tov!" Only then did he regain his composure and recount the Malach's greatness.

R. Avraham lived only 36 years, just long enough - chassidim say in the name of R' Meir of Premishlan - to liberate the soul of the pious Rabbi Yisrael of Rizhin from the "treasure house of souls." R' Yisrael of Rizhin himself believed that his grandfather, R. Avraham, was that rare Tzaddik capable of clinging to his Creator constantly. When Rabbi Moshe of Savran noted that R. Avraham didn't live very long, R' Yisrael retorted, "Irrelevant! One only comes into this world to accomplish what is good for his soul. Once he finishes, he returns to the Source, whence his soul was hewn."

Messages in a Dream

After the week of Shivah, R. Avraham's wife came to Chavastov to receive her husband's bequest. R. Avraham's followers tried to comfort her, but she was inconsolable. That night she dreamed that she entered a great, beautiful palace, where she beheld her husband, his face radiant with joy, and several distinguished-looking elders.

"My wife always complained that I was overly abstemious," he told them, "and she was justified. I therefore beg her forgiveness in your presence."

"You are forgiven wholeheartedly," she replied.

"The Torah allows her to remarry," R' Avraham continued, "especially since she is only 24 years old. I will not prevent her. But if she agrees not to marry another, I will cover all her expenses, and those of her children. And when she comes home, each child will already have an appropriate match."

When she returned home, her children immediately found good shidduchim (matches), and her business improved and provided for all her needs. The Malach continued to appear in her dreams whenever necessary.

When the wife of Rabbi Nachum of Chernobyl passed away, R. Nachum considered taking R. Avraham's widow as his wife. He sent the Malach's son, Rabbi Shalom Shachna, to discuss it with her.

One night, on the way to his mother's home, R. Shalom Shachna dreamed that his father was standing at the entrance to a magnificent palace, his hands reaching its ceiling. "Who dares to enter my palace?!" the Malach shouted. When he awoke, R. Shalom Shachna realized that he and R. Nachum had overstepped their bounds.

R. Avraham attributed the decline of the Chassidic idea through the generations to the terrible sufferings of exile, which, ironically, should have propelled the nation towards its Tzaddikim, through whom goodness and perfection reach the Lower Worlds.

The Malach perceived the Tzaddik as central to redemption. The Jews could rise spiritually only by rallying around him, while he in turn would encompass them all and cleave to HaShem.

Despite this image of the Tzaddik as a man of the people who provides for everyone, he himself withdrew from the world allowing no one into his domain. The foundation of Chassidus is the Rebbe, the Tzaddik of the generation; R. Avraham was the Tzaddik without the generation.

The essence of R. Avraham's teachings lies perhaps in two famous sayings. Quoting a prayer recited on Shabbos, "And all who stand erect shall bow before You," he explained, "Only after reaching his full stature can one completely nullify and subjugate himself, and bow to the Eternal."

Elsewhere in the Shabbat liturgy, we proclaim: "There is none comparable to You, HaShem, our God, in this world; and none beside You, our King, in the World to Come...." Said the Malach: "If, Heaven forbid, there were a split-second without Your inspiration and providence, what could this world give me? What pleasure would I derive from the coming of Mashiach or the resurrection of the dead? But if You are here, everything is here; for nothing can compare to You and the great delight and pleasure of Your influence. There is no satisfaction like that which we gain from You."

Forever seeking the satisfaction to be gained from God - this was the way of the Malach, the way of an angel in human form.

*** More information about the descendants of the Maggid of Mezritch can be found in the book Beit Rizhin. (Hebrew)

May the merit of the tzaddik  Rabbi Avraham HaMalach  protect us all, Amen.