Rabbi Yisrael ben Ze'ev Wolf Lipkin, also known as "Israel Salanter" or "Yisroel Salanter", was the father of the Musar movement in Orthodox Judaism and a famed Rosh yeshiva and Talmudist 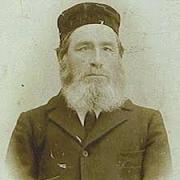 Rabbi Yisrael ben Ze'ev Wolf Lipkin, also known as "Israel Salanter" or "Yisroel Salanter" (November 3, 1809, Zhagory – February 2, 1883, Königsberg), was the father of the Musar movement in Orthodox Judaism and a famed Rosh yeshiva and Talmudist. The epithet Salanter was added to his name since most of his schooling took place in Salant (now the Lithuanian town of Salantai), where he came under the influence of Rabbi Yosef Zundel of Salant. He is the father of mathematician Yom Tov Lipman Lipkin.

Yisroel Lipkin was born in Zagare, Lithuania on November 3, 1809, the son of Rabbi Zev Wolf, the rabbi of that town and later Av Beth Din of Goldingen and Telz, and his wife Leah. As a boy, he studied with Rabbi Tzvi Hirsh Braude of Salant.

After his 1823 marriage to Esther Fega Eisenstein, daughter of Yenta and Yaakov HaLevi Eisenstein (died August 1871, Vilnius), Rabbi Lipkin settled with her in Salant. There he continued his studies under Rabbi Hirsch Brodaand Rabbi Yosef Zundel of Salant, himself a disciple of Rabbi Chaim Volozhin. Rabbi Zundel exerted a deep influence on the development of Lipkin's character; he had stressed religious self-improvement (musar), which Lipkin later developed into a complete method and popularized.

Around 1833 he met the decade-younger Rabbi Alexander Moshe Lapidos, who became his lifelong Talmid-Chaver.

He was a tremendous Torah scholar. Around 1842, Rabbi Lipkin was appointed rosh yeshiva of Rabbi Meile's yeshiva (Tomchai Torah) in Vilna. When a minor scandal arose related to his appointment, he left the post to its previous inhabitant and moved to Zarechya, an exurb of Vilna. While there, he established a new yeshiva, where he lectured for about three years.

At Rabbi Lipkin's suggestion, the Musar writings of Moshe Chaim Luzzatto, Solomon ibn Gabirol, and Menachem Mendel Lefin were reprinted and popularized in Vilna. He began to be known as Rabbi Salanter.

Despite the prohibition against doing work on Shabbat , Rabbi Salanter set an example for the Lithuanian Jewish community during the cholera epidemic of 1848. He ensured that any necessary relief work on Shabbat for Jews was done by Jews. Although some wanted such work to be done on Shabbat by non-Jews, Rabbi Salanter held that both Jewish ethics and law mandated that the obligation to save lives took priority over other laws. During Yom Kippur (the Day of Atonement), Rabbi Salanter ordered that Jews that year must not abide by the traditional fast, but instead must eat in order to maintain their health, again for emergency health reasons. Some claim that, to allay any doubts, he himself went up to the synagogue pulpit on that holy day, recited the Kiddush prayer, drank and ate - as a public example for others to do the same.

In 1848, the Czarist government created the Vilna Rabbinical School and Teachers' Seminary. Rabbi Lipkin was identified as a candidate to teach at or run the school. As he feared that the school would be used to produce rabbinical "puppets" of the government, he refused the position and left Vilna. Salanter moved to Kovno, where he established a Musar-focused yeshiva at the Nevyozer Kloiz.

He retained charge until 1857, when he left Lithuania and moved to Prussia to recover from depression. He remained in the house of philanthropists, the Hirsch brothers of Halberstadt, until his health improved. In 1861 he started publication of the Hebrew journal Tevunah, devoted to rabbinical law and religious ethics. After three months the journal had failed to garner enough subscriptions to cover its costs, so he closed it.

Rabbi Lipkin lived for periods in Memel, Königsberg and Berlin. He devoted the last decades of his life to strengthening Orthodox Jewish life in Germany and Prussia. He also played a large role in thwarting an attempt to open a rabbinic seminary in Russia. Toward the end of his life, Rabbi Lipkin was called to Paris to organize a community among the many Russian Jewish immigrants, and he remained there for two years.

Rabbi Lipkin is known as one of the first people to try to translate the Talmud into another language. However, he died before he could finish this immense project. Rabbi Lipkin died on Friday, February 2, 1883 (25 Shevat 5643), in Königsberg, then part of Germany. For many years, the exact location of his grave was unknown. Following a lengthy investigation, in 2007 the grave was located in Königsberg.

Rabbi Yisroel Salanter was unique and his views were not always in the mainstream.

He was careful to always comply with the law, even where this was discriminatory against Jews. For example, in order to be able to legally travel outside of the Pale of Settlement, he became a master dye-maker. This enabled him to receive a permit allowing free travel within Russia.

Rav Salanter had an outreach philosophy and was the first major East European rabbi to move to Western Europe, where the Orthodox considered religious standards to be lower. He was considered one of the most eminent Orthodox rabbis of the nineteenth century because of his broad Talmudic scholarship, and his deep piety.

When the Ukase was established to require obligatory military service, they collected youths from the Jewish communities. Rabbi Lipkin wrote to the rabbis and community leaders urging them to keep lists of recruits, so as to leave no pretext for the contention that the Jews shirked such service. At the same time, he fought vigorously through political connections in St. Petersburg for the nullification of the Cantonist Decree. He told his disciples that the day the decree was annulled (26 August 1856) should be declared a Yom Tov (Jewish holiday).

Rabbi Salanter is recognized as the father of the Musar movement developed in 19th century Orthodox Eastern Europe, particularly among the Lithuanian Jews. The Hebrew term musar (מוּסַר, properly transliterated as musar), is from the book of Proverbs 1:2 meaning instruction, discipline, or conduct. The term was used by the Musar movement to refer to disciplined efforts to further ethical and spiritual development. The study of Musar is a part of the study of Jewish ethics.

Rabbi Salanter is best known for stressing that the inter-personal laws of the Torah bear as much weight as Divine obligations. According to Rabbi Lipkin, adhering to the ritual aspects of Judaism without developing one's relationships with others and oneself was an unpardonable parody. There are many anecdotal stories about him that relate to this moral equation, see for example the following references.

The concept of the subconscious appears in the writings of Rabbi Salanter well before the concept was popularized by Sigmund Freud. Already in 1880, the concept of conscious and subconscious processes and the role they play in the psychological, emotional and moral functioning of man are fully developed and elucidated. These concepts are referred to in his works as the "outer" [chitzoniut] and "inner" [penimiut] processes, they are also referred to as the "clear" [klarer] and "dark" [dunkler] processes. They form a fundamental building block of many of Rabbi Salanter's letters, essays and teachings. He would write that it is critical for a person to recognize what his subconscious motivations [negiot] are and to work on understanding them.

Rabbi Salanter would teach that the time for a person to work on not allowing improper subconscious impulses to affect him was during times of emotional quiet, when a person is more in control of his thoughts and feelings. He would stress that when a person is experiencing an acute emotional response to an event, he is not necessarily in control of his thoughts and faculties and will not have access to the calming perspectives necessary to allow his conscious mind to intercede.

Based on his understanding of subconscious motivation, Rabbi Salanter was faced with a quandary. Given that a person's subconscious motivations are often not apparent or under the control of a person and are likely to unseat conscious decisions that they may make, how is it then possible for a person to control and modify their own actions in order to improve their actions and act in accordance with the dictates of the Torah? If the basis of a person's actions are not controlled by them, how can they change them through conscious thought?

Rabbi Salanter writes that the only possible answer to this quandary is to learn ethical teachings with great emotion [limud hamusar behispa'alut]. He taught that a person should choose an ethical statement [ma'amar chazal] and repeat this over and over with great feeling and concentration on its meaning. Through this repetition and internal arousal, a person would be able to bring the idea represented in the ethical teaching into the realm of his subconscious and thus improve their behaviour and "character traits".

Rabbi Salanter felt that people would be embarrassed to study ethical teachings [limud ha'musar] in such a way in a normal study-hall [bet ha'medrash] and he therefore invented the idea of a "house of ethical teachings" [bet ha'mussar] that would be located next to an ordinary study hall and that would be designated for learning ethics in this way.

One of the more popular teachings of Rabbi Salanter is based on a real life encounter he had with a shoemaker one very late night. It was Motza'ei Shabbat (Saturday night after Shabbat) and Rabbi Salanter was on the way to the synagogue to recite Selichot. Suddenly he felt a tear in his shoe, so he looked around town to see if there was a shoemaker still open for business at this late hour. Finally he located a shoemaker sitting in his shop working next to his candle. Rabbi Salanter walked in and asked him, "Is it too late now to get my shoes repaired?" The shoemaker replied, "As long as the candle is burning, it is still possible to repair." Upon hearing this, Rabbi Salanter ran to the synagogue and preached to the public what he had learned from the shoemaker. In his words, as long as the candle is burning, as long as one is still alive, it is still possible to repair one's soul.

May the merit of the tzadik Rabbi Israel Salanter [rotect us all. Amen