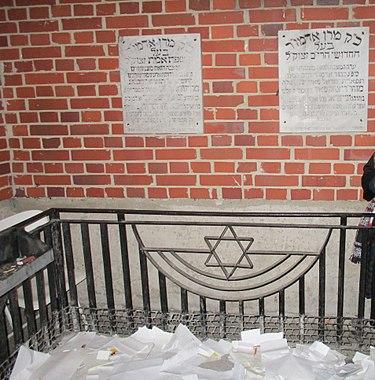 Rabbi Alter was born in Magnuszew, Poland, in late 1799. He came from a very distinguished family of rabbis, among the most prominent in Germany and Poland. He was a descendant of Rashi and of the Tosafist, Rabbi Meir ben Baruch of Rothenburg.

He married Feigele Lipszyc, daughter of Moshe 'Halfon' Lipszyc, in 1811, and settled in Warsaw. They had fourteen children, according to most published sources, most of whom died in infancy.

Rabbi Alter became known as a Talmudic gaon. At first he was close to the rebbes of Kozhnitz. After some years, he was drawn to Rebbe Simcha Bunim of Prshischa, whose close adherent he became. After the demise of Simcha Bunim, Alter became a disciple of Rabbi Menachem Mendel of Kotzk, also known as the Kotzker Rebbe, who was famous for his acerbic wit and Talmudic brilliance. He was soon followed by a large number of Simcha Bunim's followers. Alter and the Kotzer Rebbe eventually became brothers-in-law, when the latter married Chaya Lipszyc, the sister of Alter's wife Feigele.

In 1830 he was forced to change his name to Alter because of his support towards the Poles during the November Uprising.

Rabbi Alter was succeeded as the Rebbe of the Ger hasidim by his colleague and disciple, Rabbi Chanoch Henoch of Aleksander.

One of his sons, Avraham Mordechai, and three daughters, Cyna Pesia, Leah Hudes, and Esther, survived to adulthood and married. However, by the time of Alter's death on 23 Adar 5626 (1866), only one child (Esther) remained alive.

Rabbi Alter is still well known for his talmudic commentary, though he wrote on many other areas. Extant published works are:

May the merit of the tzadik  Rabbi Yitzchak Meir Rotenberg-Alter protect us all. Amen