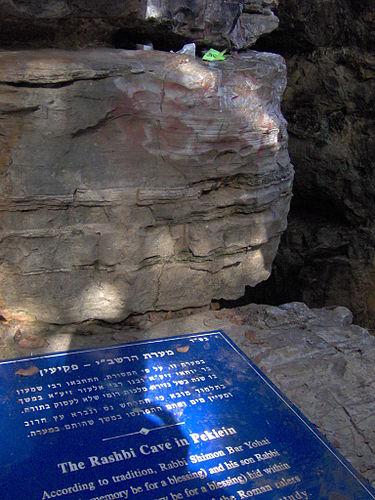 Rabbi Elazar is mentioned in the Mishnah three times (Beitza 4:5; Temurah 4:4; Nega'im 12:2), but several anonymous mishnayot have been ascribed to him (Chulin 30a, Bechorot 51b). He is frequently mentioned in beraitot, Tosefta (especially those of Zevachim and menachot), Babylonian Talmud, Jerusalem Talmud, and few aggadic teachings. He engaged in debates and discussions with Rabbi Yehudah HaNassi (Bava Metziah 84b), R' Yose, R' Meir, R' Yehudah (Sotta 34a; Rosh HaShana 4b).

Rabbi Elazar and his father Rabbi Shimon Bar Yochai escaped from the Romans by hiding in a cave for 13 years. He participated with his father in the authorship of the Zohar, and a considerable number of teachings are ascribed to him.

R' Elazar accepted under compulsion a position in the Roman administration as an official responsible for the apprehension of thieves. This aroused the opposition of the sages, including Rabbi Yehudah ben Karcha, his teacher, who reprimanded him by saying, "Vinegar, the son of wine! How long will you continue to hand over the people of our God to be killed?" R' Elazar responded, "I am pruning the thorns from the vineyard." R' Yehoshua ben Karcha returned, "Let the master of the vineyard come to prune His thorns" (Bava Metzia 83b).

He was once worried that he turned somebody over to the government unjustly, so he prayed that he should be inflicted with suffering. Every evening he called for afflictions, "Come unto me , my brothers and friends," and in the morning he sent them away so that he would be able to study Torah. He became so afflicted that every morning they removed 60 basins of blood from him. His wife prepared 60 kinds of "pap" (meals made of figs) every day to heal him. When his wife discovered that he was requesting the suffering, she was annoyed that he caused her so much trouble and expense, for all the money that she received from her father she spent on his illness. She left him and went to her father's house.  In the meantime, a storm had arisen at sea and a boat coming from R' Elazar's town was in danger of sinking. The sailors began praying, and they finally cried out in desperation. "Save us, O God, for the sake of R' Elazar ben R' Shimon..." The storm subsided, and when the sailors reached land they visited R' Elazar and presented him with 60 slaves, each bearing 60 purses of money. They also prepared 60 kinds of pap, which he ate and was healed. One day his wife sent her daughter to see how R' Elazar was faring. R' Elazar told his daughter to "go and tell your mother that I am richer than her parents," whereupon his wife returned to him. When he recovered and went to the beit midrash, they brought before him 60 specimens of blood, and he purified them all and declared all of them clean. The other sages wondered whether it was possible that there was no doubt about a single one of the specimens. R' Elazar responded, "If it is not as I said, then let there be at least one female among them." All the children born were males, and they were named "Elazar" after him.

Before he died he told his wife: "I know that the sages are angry with me [for turning over many of their relatives] and they may not attend my funeral. You shall leave me in the attic and do not be afraid of me." She followed his wishes and kept him in the attic for 18 to 20 years after his death. She would ascend to the attic every day to examine his hair and would not find anything. When one day a hair fell out, blood was visible. She once found a worm in his ear and was upset, until he appeared to her that night in a dream and told her, "It is nothing to be upset about for this is a punishment for my having allowed a young scholar to be insulted in my presence..."   After his death, whenever two people came to his house for a lawsuit, they would stand at the door and state their cases. A voice would then issue from the attic: "You, ploni, are just/unjust with your claims."   A neighbor once said to R' Elazar's wife during a quarrel: "Let her be like her husband, who was not worthy of burial!" When the sages herd of this they said that it was an insult to the deceased and he must be buried. According to others, R' Shimon Bar Yochai, R' Elazar's father, appeared to the sages in a dream and said, "There is a young pigeon among you and you and you are neglecting to bring it to me." When the sages went to bury him, the people of Achbarin refused to give them the body, because as long as his body was in the attic no wild beast had ever come to the city. On erev Yom Kippur, when the townspeople were busy, the sages hired some men from the neighboring village of Biri to remove R' Elazar's body. The sages brought him to his father's cave in Meron to be buried.

R' Elazar was married to the daughter of Rabbi Shimon ben Yose ben Lekunya. He had a daughter and a son. His son Yose almost turned to a life of crime. Rabbi Yehudah HaNassi, however, placed him under the care of  Rabbi Shimon ben Yose ben Lekunya, and the boy eventually became a student of R' Yehudah HaNassi. After R' Elazar died, R' Yehudah HaNassi wanted to marry his widow. She refused, saying, "May a vessel that was used by a holy one be used by an ordinary one?" Rebbi responded, "Allowing that he was greater than I in Torah, but was he superior to me in good deeds?" She answered, "I do not know if he was greater than you in Torah, but in deeds I do know, for he accepted suffering on himself" (Bava Metziah 84b)

May the merit of the tzaddik Rabbi Elazar protect us all, Amen.